Skip to main content
SPRING CYBER EVENT STARTS NOW: And it's a really BIG deal! Up to 88% off through 5/24>
A History of the Bible - eBook
By: John Barton
Stock No: WW98941EB 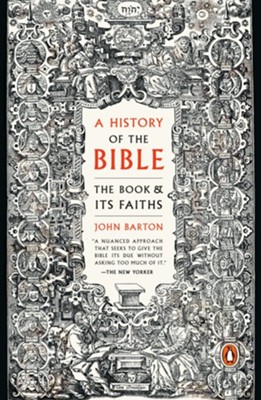 A History of the Bible - eBook

▼▲
A literary history of our most influential book of all time, by an Oxford scholar and Anglican priest

In our culture, the Bible is monolithic: It is a collection of books that has been unchanged and unchallenged since the earliest days of the Christian church. The idea of the Bible as "Holy Scripture," a non-negotiable authority straight from God, has prevailed in Western society for some time. And while it provides a firm foundation for centuries of Christian teaching, it denies the depth, variety, and richness of this fascinating text. In A History of the Bible, John Barton argues that the Bible is not a prescription to a complete, fixed religious system, but rather a product of a long and intriguing process, which has inspired Judaism and Christianity, but still does not describe the whole of either religion. Barton shows how the Bible is indeed an important source of religious insight for Jews and Christians alike, yet argues that it must be read in its historical context--from its beginnings in myth and folklore to its many interpretations throughout the centuries.

It is a book full of narratives, laws, proverbs, prophecies, poems, and letters, each with their own character and origin stories. Barton explains how and by whom these disparate pieces were written, how they were canonized (and which ones weren't), and how they were assembled, disseminated, and interpreted around the world--and, importantly, to what effect. Ultimately, A History of the Bible argues that a thorough understanding of the history and context of its writing encourages religious communities to move away from the Bible's literal wording--which is impossible to determine--and focus instead on the broader meanings of scripture.

▼▲
John Barton is a theologian who served as the Oriel and Laing Professor of the Interpretation of Holy Scripture at the University of Oxford in England for twenty-three years, and has been a serving priest in the Church of England since 1973. He has studied and taught the Bible throughout his academic career, and has written many books on it, including Ethics in Ancient Israel and The Bible: The Basics. He is the editor in chief of the Oxford Research Encyclopedia of Religion. He lives in Abingdon, United Kingdom.

Praise for A History of the Bible:

"In addition to laying out the historical contexts in which the Old and the New Testaments were created, this stimulating study considers how they have been read, taught, and lived by believers&hellip;[Barton] proposes a nuanced approach that seeks to give the Bible its due without asking too much of it." --The New Yorker

"A History of the Bible is a lucidly written distillation of a vast array of scholarship." --Wall Street Journal

"A supple and intelligent recap of the Holy Scriptures, their origins and contexts, [and] their meaning in a broad historical sense" --Lit Hub

"Immensely impressive&hellip;A HISTORY OF THE BIBLE is a confident, distinctly courteous performance, wary of overstatement and sure of its intellectual footing. No work of literature has a more fascinating life story than the Bible, and Barton has told it with a precision and insight that will make this the definitive account of the century." -- Christian Science Monitor

"John Barton has written a wise and eminently sane book about a book which has inspired both insanity and wisdom. It is a landmark in the field, and it will do great good." -- Diarmaid MacCulloch

"John Barton’s new book gives a superb overview... condensing masses of research into an easily accessible volume for the non-specialist ... even for those deeply familiar with the Bible there is much here to be learnt." -- Bart D Ehrman, author of The Triumph of Christianity: How a Forbidden Religion Swept the World

"With emotional and psychological insight, Barton unlocks this sleeping giant of our culture for the untrained but curious general reader... He has produced a masterpiece." -- Peter Stanford, Sunday Times

"This strikingly accessible yet wonderfully erudite volume will be welcomed by many &hellip; a tour de force." -- BBC History Magazine

"Barton is extremely good at untangling what is actually known from what can be reasonably inferred from what has been lost to time...his book will have much to tell both curious secular readers and the faithful about the patchwork process by which a compilation that is so often treated monolithically came to exist." -- Harper's Magazine

▼▲
I'm the author/artist and I want to review A History of the Bible - eBook.
Back
Back