Skip to main content
A History of Civilizations
By: Fernand Braudel
Stock No: WW24896 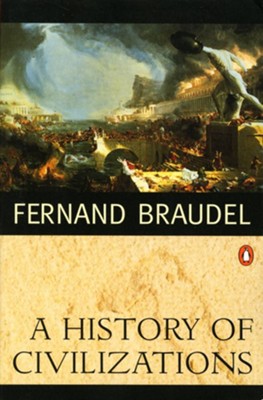 A History of Civilizations

▼▲
In this illuminating account, one of the century's greatest historians surveys "the main contemporary civilizations." Separate sections examine the Muslim world, Black Africa, the Far East, Western Europe (from the fall of the Roman Empire to political union), "the other Europe" to the East, the European civiliations of the New World, and the "English-speaking universe". Even an educational text, Braudel once suggested, can be "a tale of adventure"-provided it is written with a "simplicity that is clarity, the light of intelligence". This clarity is present throughout A HISTORY OF CIVILIZATIONS. 600 pages, softcover.

▼▲
Written from a consciously anti-enthnocentric approach, this fascinating work is a survey of the civilizations of the modern world in terms of the broad sweep and continuities of history, rather than the "event-based" technique of most other texts.

▼▲
Fernand Braudel was France's foremost post-war historian. He is best known for The Mediterranean in the Age of Philip II, Civilization and Capitalism and The Identity of France. Richard Mayne is a renowned translator of French. His other translations include Monet's Memoirs.

▼▲
I'm the author/artist and I want to review A History of Civilizations.
Back