Skip to main content
A History of Christianity (Paul Johnson)
By: Paul Johnson
Stock No: WW70591 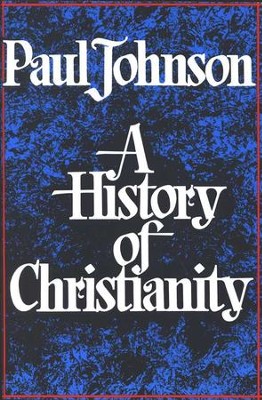 A History of Christianity (Paul Johnson)

▼▲
Covering the time form 50 AD to 1975 AD, this book is splitinto 8 sections. A large, thoughtful, poised work by amaster of discrimination who is a good writer and a clearthinker. Tackles a complicated subject in which prejudiceshave a tendency to get in the way of scholarship. This doesnot happen since he has Christian, not sectarian, sympathies. Paul Johnson was editor of the English weekly, The New Statesman, and is now Director of New Statesman Publishing Company.

▼▲
First published in 1976, Paul Johnson’s exceptional study of Christianity has been loved and widely hailed for its intensive research, writing, and magnitude—"a tour de force, one of the most ambitious surveys of the history of Christianity ever attempted and perhaps the most radical" (New York Review of Books).

In a highly readable companion to books on faith and history, the scholar and author Johnson has illuminated the Christian world and its fascinating history in a way that no other has. Johnson takes off in the year AD 49 with his namesake the apostle Paul. Thus beginning an ambitious quest to paint the centuries since the founding of a little-known ’Jesus Sect’, A History of Christianity explores to a great degree the evolution of the Western world. With an unbiased and overall optimistic tone, Johnson traces the fantastic scope of the consequent sects of Christianity and the people who followed them. Information drawn from extensive and varied sources from around the world makes this history as credible as it is reliable. Invaluable understanding of the framework of modern Christianity—and its trials and tribulations throughout history—has never before been contained in such a captivating work.

▼▲
Beginning with Modern Times (1985), Paul Johnson's books are acknowledged masterpieces of historical analysis. He is a regular columnist for Forbes and The Spectator, and his work has also appeared in The New York Times, The Wall Street Journal, and many other publications.

▼▲
Malcolm Muggeridge New Statesman (London) Paul Johnson's study of Christianity, from his namesake Apostle to Pope John XXIII, more particularly in relation to the role in world history of the Roman Catholic Church and other institutional manifestations, can only be described as masterly. It combines a great wealth of scholarship, including many fascinating byways as well as the main highways, with a vigorous, confident style, a kind of innate intensity which carries the narrative along so that it rarely falters and is never dull.
W. H. C. Frend The New York Review of Books His is a tour de force, one of the most ambitious surveys of the history of Christianity ever attempted and perhaps the most radical. In eight sections, with a great range of reading and a knowledge that is never made tedious, he tells the story of the rise, greatness, and decline of Christianity.
Richard Marius The Christian Century Paul Johnson, an English Roman Catholic, has given us the best one-volume history of Christianity ever done.
Michael McCauley Commonweal That the history of Christianity can be lucidly surveyed in a single, comprehensive volume of 556 pages is no small accomplishment. To Paul Johnson's credit A History of Christianity neither skimps on significant details or wallows in scholarly fussiness. Johnson provides a panoramic overview of events which have shaped our twentieth century Western lifestyle far more than we realize....For economy of style combined with a sympathetic understanding of the nearly 2000 years of Christianity's conflicts as well as its glorious achievements, Johnson's History is exceptional.
J. Enoch Powell The Daily Telegraph (London) It is astonishingly well done.
Robert Kirsch Los Angeles Times Johnson has written a readable and provocative history based more on politics, economics and social and cultural facts than on theology....[He] bases his account on modern scholarship, achieves objectivity without aridity, arrives at the present age after examining the recurring cycles of religious response to situations.
Mayo Mohs Time An ambitious, magisterial and ultimately positive book.
Martin E. Marty The New York Times Book Review A reliable if hard-edged story of the public church.

▼▲
I'm the author/artist and I want to review A History of Christianity (Paul Johnson).
Back
Back