Skip to main content
SPRING CYBER EVENT STARTS NOW: And it's a really BIG deal! Up to 88% off through 5/24>
A Harvest of Thorns
By: Corban Addison
Stock No: WW042295 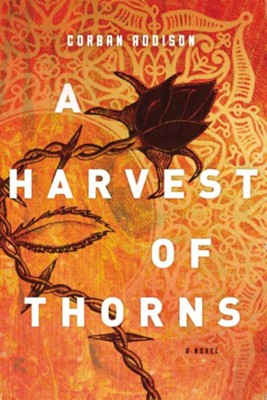 A Harvest of Thorns

Presto Omnishops Corporation in Virginia is one of America’s largest retailers. In Dhaka, Bangladesh a garment factory that burns to the ground. A teenage girl found on the ground after a fall from the multi story building.  Over her mouth is a mask of fabric with the label Presto Omnishops Corporation. Cameron Alexander, the company's general counsel, watches the media coverage on the news in horror from his office in the United States.  Due to controversy about sweatshops, labor rights, and the ethics of globalization, he wants to try to contain the potential damaging story as much as possible.

A year later, in Washington, D.C., Joshua Griswold, a disgraced former journalist from the Washington Post, receives an anonymous summons from a corporate whistleblower who offers him confidential information about Presto and the fire. He jumps at the chance to salvage his reputation and builds a historic case against Presto.

A beloved American corporation with an explosive secret. A disgraced former journalist looking for redemption. And a corporate executive with nothing left to lose.

In Dhaka, Bangladesh, a garment factory burns to the ground, claiming the lives of hundreds of workers, mostly young women. Amid the rubble, a bystander captures a heart-stopping photograph—a teenage girl lying in the dirt, her body broken by a multi-story fall, and over her mouth a mask of fabric bearing the label of one of America’s largest retailers, Presto Omnishops Corporation.

Eight thousand miles away at Presto’s headquarters in Virginia, Cameron Alexander, the company’s long-time general counsel, watches the media coverage in horror, wondering if the damage can be contained. When the photo goes viral, fanning the flames of a decades-old controversy about sweatshops, labor rights, and the ethics of globalization, he launches an investigation into the disaster that will reach further than he could ever imagine—and threaten everything he has left in the world.

A year later in Washington DC, Joshua Griswold, a disgraced former journalist from the Washington Post, receives an anonymous summons from a corporate whistleblower who offers him confidential information about Presto and the fi re. For Griswold, the challenge of exposing Presto’s culpability is irresistible, as is the chance, however slight, at redemption. Deploying his old journalistic skills, he builds a historic case against Presto, setting the stage for a war in the courtroom and in the media that Griswold is determined to win—both to salvage his reputation and to provoke a revolution in Presto’s boardroom that could transform the fashion industry across the globe.

Praise for Harvest of Thorns:

"This expos&eacute; of the underbelly of the international fashion industry is disturbing, moving, and thoroughly engrossing." —Phillip Margolin, New York Times bestselling author of Violent Crimes

"A must-read book which uncovers what lies behind what we wear every single day. I promise that you will never be able to look at your clothes the same way again." – Livia Firth, OXFAM Global Ambassador, UN Leader of Change, and Founder of Eco Age LTD

"This is a poignant and engrossing description of the manner in which men and women from the poorest countries on the globe are pressed into working for slave wages to manufacture soft goods to be sold in the most affluent counties in North America and Europe. Corban Addison will hold you spellbound with his elegant prose from his first word to his last." – Wilbur Smith, worldwide bestselling author

Corban Addison is the international bestselling author of A Walk Across the Sun, The Garden of Burning Sand, and The Tears of Dark Water,which won the 2016 Wilbur Smith Adventure Writing Award. His novels have been published in over 25 countries. An attorney, activist, and world traveler, he is a supporter of humanitarian and social justice causes around the world. He lives with his wife and children in Virginia. Learn more at his website corbanaddison.com Facebook: CorbanAddison Twitter: @CorbanAddison

▼▲
“The shocking prologue in Addison’s latest starts the book off with a bang and sets the tone nicely. This should appeal to fans of meaty whodunit stories; it’s also compelling, captivating and moderately paced.”
'Through his broad, intelligent research and insightful writing, Addison prods the conscience, trumpeting justice while acknowledging that the cost of a globalized society is incalculably higher than the price of a T-shirt.'
“Addison (The Tears of Dark Water) crafts a stunning legal thriller that will immerse readers in its South Asian setting and fascinating characters. Its focus on workers rights and social justice is also bound to have crossover appeal . . .”

▼▲
I'm the author/artist and I want to review A Harvest of Thorns.
Back
Back