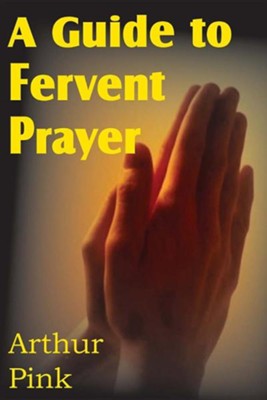 A Guide to Fervent Prayer

▼▲
At one time or another we all get the feeling that our prayer time has lost its edge...become uninspired and burdensome. Arthor Pink's A Guide to Fervent Prayer will help revitalize your prayer life through reflections of the prayers of the apostles."How blessed it is to hear some aged saint, who has long walked with God and enjoyed intimate communion with Him, pouring out his heart before Him in adoration and supplication. But how much more blessed should we esteem it could we have listened to the utterances of those who accompanied with Christ in person during the days when He tabernacled in this scene. And if one of the apostles were still here upon earth what a high privilege we should deem it to hear him engage in prayer "Arthur Walkington Pink was an English Christian evangelist and Biblical scholar known for his staunchly Calvinist and Puritan-like teachings. Though born to Christian parents, prior to conversion he migrated into a Theosophical society (an occult gnostic group popular in England during that time), and quickly rose in prominence within their ranks. His conversion came from his father's patient admonitions from Scripture. It was the verse, Proverbs 14:12, 'there is a way which seemeth right unto a man, but the end thereof are the ways of death, ' which particularly struck his heart and compelled him to renounce Theosophy and follow Jesus.

▼▲
I'm the author/artist and I want to review A Guide to Fervent Prayer.
Back