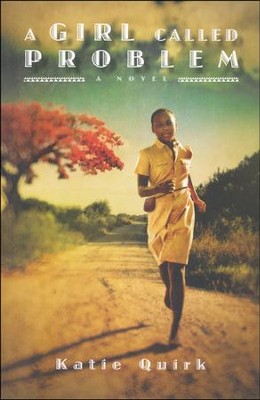 ▼▲
13-year-old Shida, whose name means "problem" in Swahili, has lived her life with a wealth of problems---her father is dead, her depressed mother is rumored to be a witch, her family bears the weight of a curse, and now the villagers of her rural Tanzanian village of Litongo are pressuring her to marry. So when the elders make a controversial decision to move the village over the hills, Shida welcomes the change. Surely the opportunity to go to school and learn from the village nurse can only mean good things!
However, when the villagers' cows are mysteriously let loose, the crops begin to fail, and Shida's young friend dies of illness, the people become convinced that they've made the wrong decision in moving. Despite these misfortunes, Shida is determined to prove to the villagers that they can have a better life in their new home.

▼▲
Thirteen-year-old Shida, whose name means "problem" in Swahili, certainly has a lot of problems in her life -- her father is dead, her depressed mother is rumored to be a witch, and everyone in her rural Tanzanian village expects her to marry rather than pursue her dream of becoming a healer. So when the village's elders make a controversial decision to move their people to a nearby village, Shida welcomes the change. Surely the opportunity to go to school and learn from a nurse can only mean good things.

However, after a series of puzzling misfortunes plague the new village, Shida must prove to her people that moving was the right decision, and that they can have a better life in their new home.

For author pictures of Tanzania, a video depicting the life of a modern Tanzanian girl, discussion questions for each chapter of the book, and suggestions for further reading, please go to katie-quirk.com and follow the links for A Girl Called Problem.

▼▲
Katie Quirk (katie- quirk.com) wrote the middle-grade novel A Girl Called Problem after living and teaching in Tanzania. She currently lives in Maine and is working on a book about raising her son in India.

▼▲
I'm the author/artist and I want to review A Girl Called Problem.
Back
Back