A Gathering of Old Men - eBook
By: Ernest J. Gaines 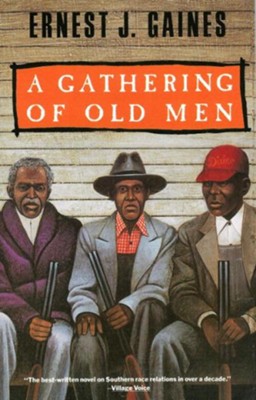 A Gathering of Old Men - eBook

▼▲
A powerful depiction of racial tensions arising over the death of a Cajun farmer at the hands of a black man--set on a Louisiana sugarcane plantation in the 1970s.

The Village Voice called A Gathering of Old Men "the best-written novel on Southern race relations in over a decade."

▼▲
Ernest Gaines was born on a plantation in Pointe Coup&eacute;e Parish near New Roads, Louisiana, which is the Bayonne of all his fictional works. He is writer-in-residence emeritus at the University of Louisiana at Lafayette. In 1993 Gaines received the John D. and Catherine T. MacArthur Foundation Fellowship for his lifetime achievements. In 1996 he was named a Chevalier de l’Ordre des Arts et des Lettres, one of France’s highest decorations. He and his wife, Dianne, live in Oscar, Louisiana.

▼▲
"Gaines knows how to tell a story. . . . [He writes] with humor, a strong sense of drama and a compassionate understanding of people who find themselves in opposing positions." —Jonathan Yardley, Washington Post

"Poignant, powerful, earthy . . . a novel of Southern racial confrontation in which a group of elderly black men band together against whites who seek vengeance for the murder of one of their own." —Booklist

"Early in this eloquent novel . . . a sheriff is summoned to a sugarcane plantation, where he finds one young white woman, about eighteen old black men, and one dead Cajun farmer.  The sheriff is sure he knows who killed the Cajun—although each of the men is toting a shotgun only one of them could hit a barn door—but threats and slaps fail to change their stories.  Each one claims guilt, and all but one promise to provoke a riot at the courthouse if the sheriff tries to make an arrest.  In the meantime, they wait for a lynch mob that the dead man's father—like the son, a notorious brute—is sure to launch. . . . Before it is over, everyone involved has been surprised by something; the old black men not least of all, by their first taste of power and pride." —The New Yorker

"A fine novel . . . there is a denouement that will shock and move readers as much as it does the characters, and a multiplicity of themes that raises a simple tale to grand signfiicance." —David Bradley, Philadelphia Inquirer

▼▲
I'm the author/artist and I want to review A Gathering of Old Men - eBook.
Back
×
Back
×