Skip to main content
A Garland of Emeralds
By: Laverne Boulogne Van Ryk
Stock No: WW304912 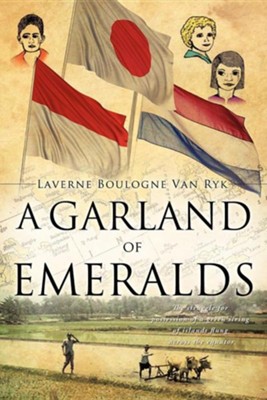 A Garland of Emeralds

▼▲
A Garland of Emeralds covers events in the life of Jasmine Carter and her family. The story begins in late 1941 at a time when freedom fighters are striving for independence from the Colonial Dutch. Also there is danger looming from the North when Japan's aggressive stance becomes clearer. Jasmine's parents came to Java as missionaries from Holland. She has two older sisters, Ellen and Yvonne, and one younger brother, Danny. Her best friend is a native girl called Sari. This friendship continues even when Jasmine discovers that Sari's cousin Sukandar is a freedom fighter. Holland has been occupied by the Germans since May 1940, and after the attack on Pearl Harbor there are three months of anxious waiting for the Japanese to attack the Indies. Early March 1942 the Japanese invade Java and the Dutch army surrenders on March 8. Jasmine is devastated when her father is arrested by the Japanese, and sent to a concentration camp. Some months later all white women and children also enter concentration camps. Jasmine has to say good-bye to Sari, knowing that she probably won't see her friend again. A garland of Emeralds is based on personal experiences.

▼▲
I'm the author/artist and I want to review A Garland of Emeralds.
Back