Skip to main content
A Future and a Hope: A Novel
By: David Mathews
Stock No: WW208306 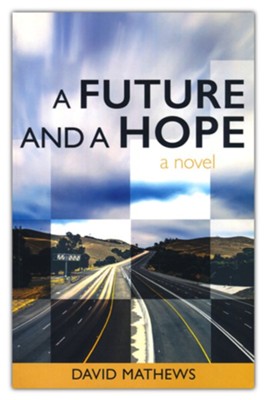 A Future and a Hope: A Novel

▼▲
Caleb Sawyer expects his senior year at Baxter High to go just as he planned. He's a member of the football team, is active in his church, has a great job, and loves hanging out with his friends at the local diner. But then he crosses paths with Ellie Thompson, the mysterious new girl in town. Ellie has a fiery personality and a tragic past. Caleb's obsession with her leads them both on advetures full of opportunities and challenges.

As their connection grows, Caleb must wrestle with his fears and doubts. Practicing what you preach is not always easy, and when the unthinkable happends, Caleb wonders if there is any future for him and Ellie. With the support of his parents and friends, and the unexpected help of a kindly old widow, Caleb's faith finally comes full circle. But is there any end to the treacherous road that is his and Ellie's relationship? Is there a future and a hope for them?

Tell us a little about yourself.  David Mathews was born in the small mid-western town of Friend, Nebraska, a community of 1100 people once listed in Ripley's Believe It or Not for having the world's smallest police station, a tiny tool shed previously used by highway construction crews. He grew up in small towns in Kansas and Indiana before settling in Indianapolis after college.

He describes himself as a big dreamer with an overactive imagination. As a child without a TV in the home, he managed to find a variety of ways to avoid boredom. Whether it was putting on puppet shows, producing radio plays, drawing cartoons, or making home movies, he always found something creative to occupy his time.

Now living in Xenia, Ohio, David and his wife, Donna, have six children between them, along with a son-in-law, daughter-in-law, three granddaughters, and two Boston Terriers. He enjoys home remodeling, woodworking, bicycling, camping, and writing. He also serves in their local church, loves being a grandfather, and never grows tired of watching Andy Griffith reruns. Always up for an adventure together, David and Donna went spelunking on their honeymoon, tent camping with bears on their anniversary, and skydiving on his 60th birthday.

What was your motivation behind this project?   Although I've always enjoyed writing, I didn't set out to write a book. I had a vivid dream one night that was basically the entire plot of this story. After sharing the details with my wife, who urged me to write them down, I felt as though God was prompting me to turn this into a novel, and I began writing. During that 8 month process, I came across a verse in the Bible that seemed to confirm what I was doing. I Pet. 4:11 says, "As each has received a gift, use it to serve one another, as good stewards of God's varied grace." I believe this story is my gift from God, and I want it to be used for His glory.

What do you hope folks will gain from this project?   This book is dedicated to everyone who, at one time or another, ever doubted the goodness of God. My prayer is that God will use A Future and a Hope to challenge someone to stay strong in their faith when the going gets tough, to convict someone who has adopted a wrong view of God because of their past or present circumstances, or to compel someone to abandon the unfulfilling life of a prodigal and return to a good and loving Father.

How were you personally impacted by working on this project?   Throughout the writing, editing, and promotional phases of this project, I have been constantly reminded that God is good, no matter what my past or current circumstances. He has impressed on me more poignantly than ever before that He indeed is sovereign, and that He has a plan for my life that is for my good and not my harm.

Who are your influences, sources of inspiration or favorite authors / artists?  Some of my greatest influences and sources of inspiration are: 1. Jim Elliot, Steve Saint, and the other 3 missionaries who lost their lives trying to reach a violent tribe with the gospel of Christ; 2. Corrie ten Boom, who remained confident in her Savior's love even while in a Nazi concentration camp; 3. Randy Alcorn, whose book Safely Home continues to challenge me to remain faithful to my Lord no matter what; 4. Ron Hamilton, whose songs "Rejoice in the Lord" and "How Can I Fear With Jesus?" speak to my heart each time I hear them.

Anything else you'd like readers / listeners to know:   If you like roller coasters, you'll like A Future and a Hope! There are a lot of plot twists and turns, surprises and "I-didn't-see-that-coming" moments, conflicts and resolutions, despair and hope, sadness and laughter. The characters are down-to-earth and timelessly relatable. Some are very likable, some not so much! If you are looking for a story that will tickle your funny bone, tweak your curiosity, tug on your emotions, and touch your heart, then look no further! I believe you'll enjoy A Future and a Hope.