Skip to main content
A Form of Godliness - eBook
By: Shane Johnson
Stock No: WW10866EB 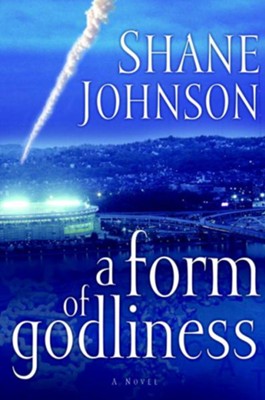 A Form of Godliness - eBook

▼▲
Experience the Nightmare of a Perfect World

Welcome to America: where every school child is completely healthy; where an all-embracing church speaks only of unconditional love and acceptance; where diseases once thought beyond reach have been conquered; and where those who have lost loved ones receive soothing messages of hope.

Yet beneath the surface of this seeming utopia lies a horrifying darkness.

In a world long since reshaped in the wake of 9/11, Matthew Bridger, president of the United States, Bryson Lawe, a Secret Service agent, and Karen Foley, a Christian activist must face the atrocity the American dream has become. Life has lost its value, deception is epidemic, and in a nation of more than three million square miles, there is no room for God.

As a Russian oil embargo jeopardizes American petroleum reserves, a massive terrorist strike forces the United States to withdraw its support of Israel. Finally given their long-awaited opening, enemies of the Jewish state attack, igniting a war that threatens to sweep the globe. Amid the escalating chaos, Bridger, Lawe and Foley race to uncover the truths that will secure their survival–and that of America itself.

▼▲
“A Form of Godliness is a breathtaking read, full of the dilemmas and triumphs of the age now upon us–nuclear blasts, world war, acts of terrorism and acts of heroism. I read every page as quickly as my eyes could move. With this spellbinding tale, Shane Johnson retains his place as one of our finest Christian novelists.”
–Jefferson Scott, author of Operation: Firebrand–Crusade

“Full of political intrigue, terrorist threats, and prophetic insight, A Form of Godliness calls out a warning that should not be ignored.  Shane Johnson proves once again that he is a powderkeg of ideas."
–Eric Wilson, author of Dark to Mortal Eyes

“Shane Johnson’s imagination takes him on unforgettable, thrilling journeys–thankfully, he invites us to go along. A Shane Johnson novel is more than a book; it’s a ride to remember.”
–Alton Gansky, author of Beneath the Ice and Out of Time

“Thought-provoking and chilling–A Form of Godliness will engross readers to the last page.”
–Linda Windsor, award-winning author of Along Came Jones

▼▲
I'm the author/artist and I want to review A Form of Godliness - eBook.
Back
Back