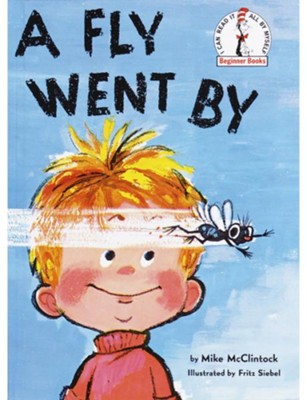 A Fly Went by

▼▲
A fly is followed by a menagerie of characters in this humorous cumulative tale edited by Dr. Seuss. When a young boy sees a frantic fly buzzing past, he asks where the fly is headed—and with that, a chase begins. The fly and the frog, the cat and the dog, the pig and the cow, the fox and the hunter . . . who is causing all the fuss? A Fly Went By will have young readers buzzing with excitement!

Originally created by Dr. Seuss, Beginner Books encourage children to read all by themselves, with simple words and illustrations that give clues to their meaning.

"The writing is merry and the pictures are real fun. Recommended."--School Library Journal.

▼▲
Mike McClintock is the author of the Beginner Books classics Stop That Ball! and A Fly Went by, which was edited by Dr. Seuss.

Fritz Siebel was born in 1913 in Vienna, Austria. He studied illustration at the Kunstgewerbeschule in Vienna and immigrated to the United States in 1936, where he served in the US Army during World War II. In America, he worked on movie posters for Paramount Pictures. His most well-known poster was an entry in a national competition to create a warning to protect national security. His entry was the famous "Someone Talked" poster, which has won numerous awards. Siebel began to find work in advertising agencies and magazines, illustrating for Colliers, Holiday, and the Saturday Evening Post, and creating the now iconic advertising character Mr. Clean. He provided the illustrations for A Fly Went By with Beginner Books at Random House in 1959. He died in 1991.

▼▲
"The writing is merry and the pictures are real fun. Recommended."--School Library Journal.

▼▲
I'm the author/artist and I want to review A Fly Went by.
Back