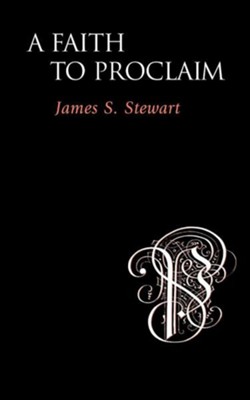 A Faith to Proclaim

▼▲
In 1999, Preaching Magazine ranked James S. Stewart as the best preacher of the twentieth century, commenting that his books on preaching ?have inspired tens of thousands of preachers to strive for greater effectiveness in their proclamation of God's Word.? In A Faith to Proclaim, James Stewart focuses on the essential message of evangelism rather than sermon preparation or delivery technique. His pointers on proclaiming the essentials of the Christian faith should be read by all who want to be more effective communicators of the Christian message. James S. Stewart (1896-1990) was a gifted Scottish preacher who taught New Testament Language, Literature and Theology at the University of Edinburgh (New College). He also served as Chaplain to the Queen in Scotland and as Moderator of the General Assembly of the Church of Scotland. He authored many books, including Heralds of God, The Strong Name, and A Man in Christ.

▼▲
I'm the author/artist and I want to review A Faith to Proclaim.
Back