We are OPEN and SHIPPING - click here for shipping estimates
A Double Barrelled Detective Story - eBook
By: Mark Twain 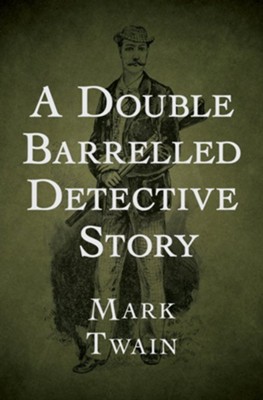 ▼▲
America’s greatest satirist sets his sights on England’s most celebrated detective in this boisterous tale of revenge, murder, and the limits of logic

Tortured, humiliated, and abandoned by her fianc&eacute;, a woman gives birth to a boy with an unusual gift. Blessed with a bloodhound’s sense of smell, Archy Stillman can track a man clear across the country. His mother, who has spent sixteen years dreaming of vengeance, finally has the means to achieve it. She sets her teenage son on his father’s trail with instructions to ruin the man as thoroughly as he ruined her.

Years later, Archy has been swept up in the California Gold Rush when a deadly explosion rocks his mining camp. The accused, an English immigrant, begs the help of his visiting uncle: the legendary sleuth Sherlock Holmes. But the incomparable investigator will find that in the Wild West, his brilliant powers of deduction are no match for Archy’s superhuman nose.

A delightful send-up of the mystery genre, A Double Barrelled Detective Story is thrilling fun from first page to last.

▼▲
Mark Twain was the pen name of Samuel Langhorne Clemens (1835–1910), who grew up in Hannibal, Missouri, and worked as a printer, riverboat pilot, newspaperman, and silver miner before his short story "The Celebrated Jumping Frog of Calaveras County" brought him international attention. He would go on to write two of the great American novels, The Adventures of Tom Sawyer and The Adventures of Huckleberry Finn, and many other enduring works of fiction, satire, and travelogue. He is one of the most widely recognized figures in US history.

"Twain’s keen eye and irreverent tongue give as much pleasure today as they did a century ago." —Los Angeles Times Book Review

▼▲
I'm the author/artist and I want to review A Double Barrelled Detective Story - eBook.
Back
×
Back
×