Skip to main content
A Divine Revelation of Prayer
By: Baxter Mary
Stock No: WW740503 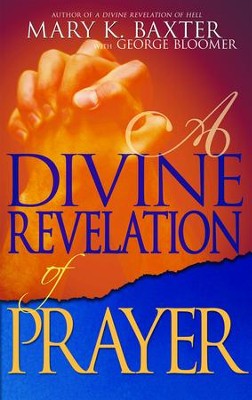 A Divine Revelation of Prayer

▼▲
When God sometimes seems silent, do you wonder whether he hears your prayers? Sharing amazing dreams and revelations, Baxter and Bloomer assure you that although you may not see God at work, he's answering your requests in the spiritual realm. Discover how to wait in faith, overcome hindrances to your petitions, persist in prayer, and more. Softcover, from Whitaker.

▼▲
Many Christians question why they can’t overcome sin and temptation and why they don’t get answers to their prayers for improved health, financial blessings, and better relationships.
Best-selling author Mary K. Baxter shares eye-opening visions and revelations on the power of prayer. Her remarkable personal answers to prayer will help you:Discover the keys to powerful, life-changing breakthroughs in prayer today!

Bishop George Bloomer is the founder and senior pastor of Bethel Family Worship Center in Durham, North Carolina, and The Life Church in Goldsboro, North Carolina. A native of Brooklyn, New York, Bloomer overcame difficult personal challenges, as well as a destructive environment of poverty and drugs, and he uses those learning experiences to empower others to excel beyond their seeming limitations. He has appeared on several television, radio, and media outlets nationwide, including CNN’s Faces of Faith, The Trinity Broadcasting Network, The Harvest Show (LeSEA Broadcasting), and The 700 Club (Christian Broadcasting Network). He can be seen weekly on his nationally broadcast program, Spiritual Authority. Bloomer is the author of a number of books, including More of Him, Authority Abusers, and the national best seller, Witchcraft in the Pews. He has also collaborated with Mary K. Baxter on A Divine Revelation of Deliverance,A Divine Revelation of Prayer, and A Divine Revelation of Healing.

▼▲
I'm the author/artist and I want to review A Divine Revelation of Prayer.
Back
Back