Skip to main content
A Dictionary of Ancient Egypt
By: Margaret Bunson
Stock No: WW99893 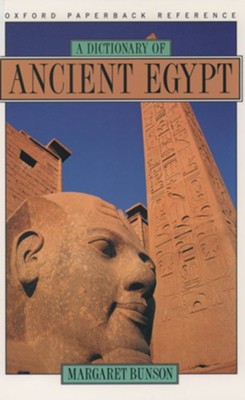 A Dictionary of Ancient Egypt

▼▲
(PUBOxford University)In softcover! From the predynastic period to the fall of the New Kingdom, there are entries on art, history, science, religion, and politics along with 170 maps, charts, and drawings. ''Great for browsing and ready referencing. Very readable.''---Choice. 320 pages.

▼▲
From Áha, king of the 1st Dynasty at Memphis (2920 B.C.), to the vast complex of pleasure palaces at Zerukha this A-Z dictionary places more than 1,500 entries on the rich world of ancient Egypt right at the reader's fingertips. The first single-volume reference of its kind, The Dictionary of
Ancient Egypt vividly combines the historical, religious, creative, artistic, military, and personal details of this venerable civilization on the Nile.
This easy-to-use dictionary covers a wealth of information from the Predynastic period around 3,000 B.C. to the fall of the New Kingdom in 1,070 B.C. Here are the many pharaohs who served as the guiding forces of Egypt, such as Djoser, the second king of the 3rd Dynasty, who after dreaming that
the god Khnum had appeared to him complaining about the sorry state of his shrine, erected a new temple at Elephantine bringing a miraculous end to a famine that plagued Egypt for seven years. And, of course, there is King Tutánkhamun, the most well-known pharaoh in modern times because of the
discovery of his tomb. We are introduced to the many Egyptian queens, who whether in command of the country or serving as a consort to the kings, remain intriguing figures in Egyptian history. There is Nefru-Sobek, the eight ruler of the 12th Dynasty, and Tiy, a queen of the 18th Dynasty and the
first queen of Egypt to have her name on official acts, even on the announcement of the king's marriage to a foreign princess. The mortuary rituals, maintained throughout ancient Egypt's history and evolving over the centuries, are covered, from simple burials on the fringes of the settlement region
and the use of tombs as a place of transfiguration, to the elaborate processes of embalming and mummification. Here also is the art, architecture, and artistic themes that so vividly represent ancient Egyptian cultural expression--the great Step Pyramid, the earliest stone building of its size in
the world; the Great Sphinx, seventy-five feet from base to crown and one-hundred-fifty feet long; scarabs, the beetle shaped amulets associated with the life-giving sun; and Satirical Papyrus, a unique collection of artistic works satirizing the state of the nation during the reigns of the last
Ramessid kings.
Abundantly illustrated with over 170 maps, charts, and drawings based on reliefs, paintings, and statues, The Dictionary of Ancient Egypt is an extraoridinary compendium of the vitality, daring, and energy of the dynasties of ancient Egypt as they established new horizons of art, architicture,
and spiritual insights on the human journey through time.

▼▲
"A good starting point for students and laypeople who want to quickly check a name or place and perhaps browse further."--American Reference Books Annual
"Bunson has addressed a need in the introductory literature of the ancient Near East."--CHOICE
"[Provides] accessible, concise information for students and general readers."--Reference and Research Book News

▼▲
I'm the author/artist and I want to review A Dictionary of Ancient Egypt.
Back