BIG SUMMER BLOWOUT: 3 Days Only! Save up to 90% thru Wednesday. Shop now >
A Dialogue of Comfort Against Tribulation
By: Thomas More 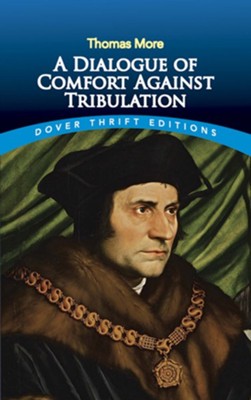 A Dialogue of Comfort Against Tribulation

A Dialogue of Comfort Against Tribulation by Thomas More was written in the Tower of London as he awaited his execution for refusing to acknowledge Henry VIII as the head of the Church of England. Set in Hungary during the Ottoman conquests, this work features a dialogue between a young man in anguish over the impending invasion and an elder's words of solace . . . helping the reader see that God is the Christian's only comfort. 262 pages, paperback.

▼▲
"I die the King's good servant, but God's first," declared Sir Thomas More from the scaffold upon his 1535 execution for treason. Condemned to death for his refusal to acknowledge Henry VIII as the Supreme Head of the Church of England, More spent his final months in the Tower of London, writing this message of hope in the face of suffering.
The noted Renaissance humanist cast his work of political thought and spiritual reflection in the form of a fictional dialogue between a young man and his dying uncle. Set in sixteenth-century Hungary during the Ottoman conquests, the colloquy voices the youth's anguish at the impending invasion and the elder's words of solace. More offers a reflection of his own dire circumstances as well as a powerful statement of his conviction that God is a Christian's only comfort. A penetrating exploration of the fleeting nature of pleasure, the essence of worldly power, and Christ's redemptive power, this book constitutes an enduring legacy of faith.

▼▲
Author, philosopher, and scholar Sir Thomas More (1478–1535) served as Henry VIII's Lord Chancellor. More's enmity toward the Protestant Reformation and refusal to acknowledge his king as supreme head of the Church of England led to accusations of treason, resulting in a trial and conviction. While imprisoned in the Tower of London and awaiting execution, More wrote A Dialogue of Comfort Against Tribulation.

▼▲
I'm the author/artist and I want to review A Dialogue of Comfort Against Tribulation.
Back
×
Back
×