Skip to main content
A Definition and Critique of Postmodernism
By: Bruce A. Proctor
Stock No: WW049321 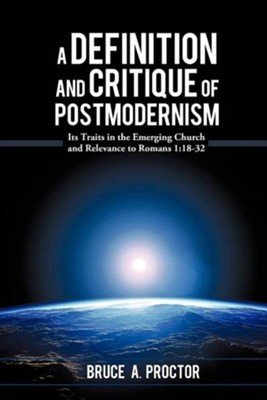 A Definition and Critique of Postmodernism

▼▲
Bruce A. Proctor is a native of Dallas, Texas but spent most of his youth growing up in Los Angeles, California. He graduated from Oklahoma Christian College (B.A.) in 1973, from Dallas Theological Seminary (Th.M.) in 1981, and Louisiana Baptist University (Ph.D.) in 2011. Bruce has held various ministerial positions including pastor, youth counselor and pastor, prison ministry leader, and college professor.Bruce has taught Bible Exposition, Theology, Old and New Testament history, and Church History at various Christian schools - Southern Bible Institute, D. Edwin Johnson Bible Institute (both in Dallas, TX), True Vine Baptist Bible Institute in Spencer, OK, and at the Ministry Training Institute, an extension of Oklahoma Baptist University in Shawnee, OK. Bruce and his wife, Patricia, reside in San Antonio, Texas. They have eight adult children.Postmodernism is difficult to define because it rejects absolute meaning. However, I found it worth trying to define it by looking at other authors' attempts to define it. It was easier for me to describe than define it. Much discussion is also given to the definition of the emergent church movement, including its fundamental tenets and marks, along with signs of drifting toward it. Next, the idea of postmodernism is weaved into the description of condemned mankind according to Romans 1:18-32. The description given is clearly relevant to the postmodern mindset as "men, who suppress the truth in unrighteousness" (verse 18). In my conclusion, I discuss the power of truth and the loss of truth due primarily to a loss of focus. However, in the Person of Jesus Christ, Truth arose from the dead and marches on victoriously despite the postmodern spirits of delusions.

▼▲
I'm the author/artist and I want to review A Definition and Critique of Postmodernism.
Back