BRING CHRISTMAS HOME SALE: Save up to 85% through 11/2 >
A Death Well Lived
By: Daniel Overdorf 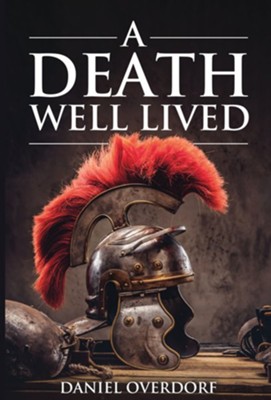 Lucius Valerius Galeo personifies the Roman Empire's ambition and dominance. An egotistical centurion, his swagger betrays his arrogance and his blood-stained fists evidence his quick temper. He serves in Judea, quelling Jewish riots in Caesarea's hippodrome and doing the bidding of the governor, Pontius Pilate, from Jerusalem's fortress of Antonia. The Jewish people repulse him.

Lucius grows intrigued when protesting Jews lay their necks open to the sword—his sword—in response to Pilate's desecration of their temple. His heart softens when a Jewish couple shows compassion to his children and their mother. His inner turmoil reaches its peak when a rabbi from Galilee arrives in Jerusalem. The rabbi's teaching and miracles force Lucius to wrestle with his deepest assumptions and desires. Will he choose the ruthless power of Rome or the eternal power of Christ?

A Death Well Lived is a captivating tale set in first century Judea that offers hope for the worst among us and the worst within us.

▼▲
Daniel Overdorf is Professor of Pastoral Ministries and Director of Preaching Programs at Johnson University in Knoxville, Tennessee. He is a popular speaker and his books are used in churches, colleges, and seminaries across the country. Learn more at DanielOverdorf.com

▼▲
“A Death Well Lived speaks clearly and boldly to making the choice to follow Christ in extreme situations. Overdorf brings to life the struggles of belief for a Roman centurion who witnesses the miracles of Jesus, and shows how that ripple in the water changes his life and the lives of those closest to him. Set in first century Judea, Overdorf draws us in and allows

▼▲
I'm the author/artist and I want to review A Death Well Lived.
Back
×