We are OPEN and SHIPPING - click here for shipping estimates
PRE-SUMMER CYBER SALE: Shop over 2,500 items up to 90% off through 5/26 >
#2: A Deadly Business - unabridged audiobook on CD
Narrated By: Ashley Laurence
By: Lis Wiehl, April Henry 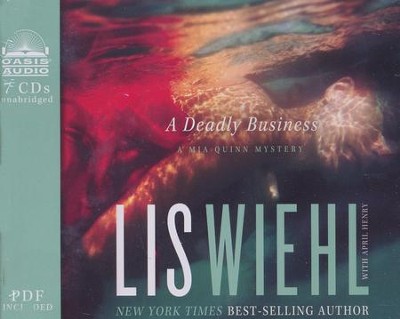 ▼▲
Mia Quinn is a Seattle prosecutor working on high profile cases in the Violent Crimes unit while juggling the impossible demands of single parenthood. Her husband, Scott, was killed in a car crash that homicide detective Charlie Carlson now believes was no accident. Charlie's instincts and professional record make it impossible for Mia to refute the evidence she'd rather not believe.

When the powers that be refuse to reopen the case, it's up to Mia and Charlie to investigate, all the while trying to deny a growing attraction between them. Was her accountant husband really in league with nefarious criminals? And who is the young woman whose photo they find on his computer?

A prosecutor of violent criminals. A detective on a dangerous beat. Together, these seasoned pros take on an off-the-books case that threatens to strip them of all they hold dear.

When a twenty-two-year-old killer walks into the courtroom, his eyes confirm what Mia Quinn already guesses: he blames her for his conviction. In seconds, he knocks her to the ground and holds a razor blade to her throat. She manages to escape, but it’s just one more reminder that Mia’s job prosecuting Seattle’s most dangerous criminals is risky.

As a single mom, the last thing Mia wants is for her work to follow her home — or discover that it already has.

Now Detective Charlie Carlson is suggesting the very thing Mia doesn’t want to believe — that her accountant husband’s deadly car accident was no accident at all. When Mia and Charlie encounter resistance to reopening the case, they take the investigation into their own hands. And find much more than they bargained for.

Was Mia’s husband more than an accountant — and less than an honest man? As the truth becomes more shocking and the case grows more complex, her husband’s enemies take note of Mia — and her children. How far will this prosecutor go to learn the truth, and how far will she have to go to protect her family?

April Henry is the New York Times best-selling author of mysteries and thrillers. Her books have been short-listed for the Agatha Award, the Anthony Award, and the Oregon Book Award. April lives in Portland, Oregon, with her husband and daughter.

▼▲
I'm the author/artist and I want to review #2: A Deadly Business - unabridged audiobook on CD.
Back
×
Back
×