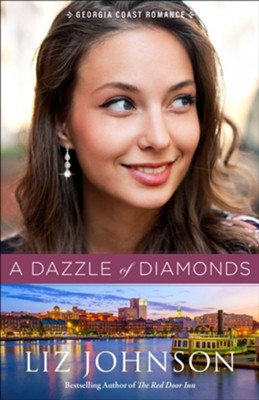 A Dazzle of Diamonds, #3

Forced to make a different plan for her life after being jilted, Penelope Hunter
threw herself into her job as event manager at one of Savannah’s best venues. Butwhen her ex-fiancé and his new bride-to-be sign on as clients and a scheming
social matriarch threatens to get her fired, her hard work may be in jeopardy.

After two tours in the Middle East, Tucker Westbrook is used to a life in flux. Hisonly constant is his long-standing friendship with Penelope and the thriving security company he’s worked hard to build. But when a cocky candidate running unopposed for county sheriff goads him,Tucker ends up on the ballot and his life is upended. Not only is he on the receiving end of a brutal smear
campaign, but he and Penelope must join forces to uncover the truth behind a 150-year-old treasure to clear his family’s name. And the more time they spend together, the closer she comes to losing her job—and falling helplessly in love.
Liz Johnson brings some of her best writing in her newest novel, A Dazzle of Diamonds—an adventurous tale of treasure, friendship, and budding romance that will have readers captivated from the very first page.

▼▲
I'm the author/artist and I want to review A Dazzle of Diamonds, #3.
Back
Back