Skip to main content
A Day at the Seashore
By: Kathryn Jackson
Stock No: WW854255 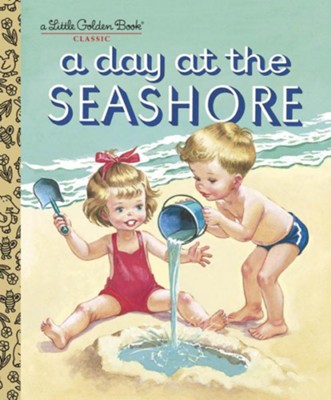 A Day at the Seashore

Nancy and Timmy hop out of their beds one summer morning and help pack their swimsuits and lunch. And then it's off to the seashore! In a charming rhyme, this Little Golden Book from 1951 (then titled A Day at the Beach) describes what preschoolers will find there: "You can catch little crabs—if you're quick! You can draw great big pictures right on the beach with a piece of a shell or a stick." Oh, what fun!

▼▲
CORINNE MALVERN (1906-1956) was born in Newark, New Jersey. It wasn't long before she and her sister Gladys became well-known child actors. Later Corinne Malvern went on to study with Theodore Lukits at the Art Students League in New York City, and worked as an art editor of the Ladies' Home Journal. A prolific illustrator of Golden Books, Malvern is best known for Doctor Dan the Bandage Man and Nurse Nancy, as well as Frosty the Snowman and The Night Before Christmas, which are among the most memorable and beloved Golden Books.

KATHRYN and BYRON JACKSON wrote hundreds of stories for Golden Books, including The Saggy Baggy Elephant, one of the most beloved Little Golden Books of all.

▼▲
I'm the author/artist and I want to review A Day at the Seashore.
Back