Skip to main content
SPRING CYBER EVENT STARTS NOW: And it's a really BIG deal! Up to 88% off through 5/24>
A Daring Sacrifice
By: Jody Hedlund
Stock No: WW749375 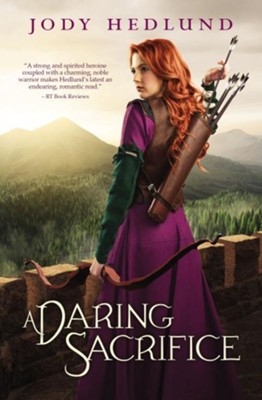 ▼▲
In A Daring Sacrifice by Jody Hedlund, Julianna is the daughter of a lord, who following her father's death, she has started disguising herself as a young man, living in the woods and helping the poor and starving people. Her harsh uncle rules the land that should be hers and orders that she be captured. Collin has been summoned to Wessex by the lord to protect the nobles from a group of vigilantes who have been attacking traveling parties with bows and arrows, stealing their valuable possessions. But when he comes across the leader of this group, he feels a familiarity to a girl that he knew as a youth. Soon he and Juliana are fighting for what each believes is right, while also fighting the feelings that have begun to develop between them both.

A reverse twist on the Robin Hood story filled with romance, adventure, twists, and turns, a treat for all fans of historical fiction and medieval stories, featuring a strong female character who can kick butt in a cloak.

For three years, the Cloaked Bandit has terrorized Wessex, robbing the nobility by knifepoint and a well-placed arrow. But little does anyone know, this bandit is in fact Juliana Wessex, the rightful ruler of the land, and a girl her tyrannical uncle—the current Lord Wessex—believes was killed along with father.

Juliana has become skilled at hiding from Lord Wessex in the forest, using her stolen goods to provide food and shelter to the peasants her uncle has taxed into poverty. But when she robs Collin Goodrich, her red hair betrays her true identity. Lord Collin remembers Juliana from their childhood—and challenges her to stay on his estate for a week in hopes she will leave her thieving ways and become a proper lady once more. Juliana is intrigued by Collin and his charms, but only time will tell if he can overcome her distaste of the nobility—as well as win her heart.

Praise for the An Uncertain Choice series:

"This sweet story will not disappoint!" —USA Today Happy Ever After blog

▼▲
Prolific Hedlund is back with another tale of medieval romance, a sequel to An Uncertain Choice (2015). Lady Juliana of Wessex lives in the forest, disguised as a boy, stealing to provide for the remnants of her father's uprising against her vicious uncle. She doesn't want to steal but must even though she is the rightful heir to the rich Wessex lands. But she goes too far when she tries to steal from the lord of the neighboring Goodrich lands and is injured in the process. Collin Goodrich has seen through her disguise and takes her to his castle to protect her. Their friendship builds and warms into a budding romance…until Collin's sister invites the Wessex usurpers into the Goodrich home. Juliana's no longer safe---and now neither is Collin. Hedlund's light on historical detail and makes no apparent attempt to find a medieval voice to suit the 1390 English setting. Nevertheless, this narrative told from Juliana's and Collin's alternating points of view has engaging-enough characters and plenty of derring-do to entertain young romance enthusiasts. Formulaic but fun for genre fans wanting a quick read. (Historical romance. 12-16) -- Kirkus

The Cloaked Bandit has been robbing the noble families of Wessex for years and has yet to be caught. Skilled at hiding in the forests, this bandit is able to conceal the fact that she is a girl, Juliana Wessex, and a member of the ruling family, who everyone believes is dead. Her talents allow her to feed and shelter the peasants of the land. While playing this Robin Hood–like role, she encounters Collin Goodrich, who recognizes her from years past. He encourages her to stay on his estate after she is injured, and teens will want to read on to find out if Collin is able to win her heart and if he will sacrifice everything for her. While Juliana and Collin are interesting characters and the action is easy to follow, the story is idealistic as opposed to realistic. While Juliana is 17, she doesn’t sound authentically teen, though falling in love and resisting temptation will be themes that will resonate with some young adults. The book includes discussion questions in the back matter relating to its Christian motifs. VERDICT A great selection for collections looking for titles with strong Christian themes or for readers who enjoy fairy tales. -- School Library Journal

Historical fiction author Jody Hedlund writes her second young adult novel about a fourteenth-century young woman living an unconventional life. In A Daring Sacrifice, Juliana Wessex is the rightful ruler of Wessex. But the current Lord Wessex (her uncle) believes she died three years ago when her father lost his life. Juliana hides in the forest and steals to provide a livelihood for the peasants on her land, impoverished by her uncle’s harsh rule. It is a life filled with risks and danger, and she struggles with the justification of her actions. When she is forced to flee Wessex after escaping capture, Juliana makes the mistake of trying to rob Colin Goodrich, who recognizes Juliana by her red hair. Colin takes her to his castle after she is injured and introduces her as a distant cousin. But her uncle discovers her presence. To what lengths will her uncle go to keep Wessex for himself? Who makes the daring sacrifice? Different text fonts indicate Juliana’s and Colin’s points of view. The spiritual element is evident but not heavy-handed; Colin and Juliana ask for God’s leading and try to live godly lives, which is especially hard for Juliana since she steals from the nobility. Filled with descriptive narrative and endearing characters, A Daring Sacrifice is an entertaining read–except for the necessary violence in the fighting scenes. Its believable plot has enough twists in the last third of the book to keep the reader up late! Fans of Lisa Bergren’s River of Time series, Dina Sleiman’s Valiant Hearts series, and Melanie Dickerson’s medieval young adult books will also enjoy Hedlund’s medieval trilogy. Readers may want to read Hedlund’s An Uncertain Choice (reviewed in Christian Library Journal, Jan/Feb/Mar/Apr 2015). A third book is in the works. Recommended for teen collections in public libraries and school libraries. Carol R. Gehringer, worthy2read.wordpress.com -- Christian Library Journal

▼▲
I'm the author/artist and I want to review A Daring Sacrifice.
Back
Back