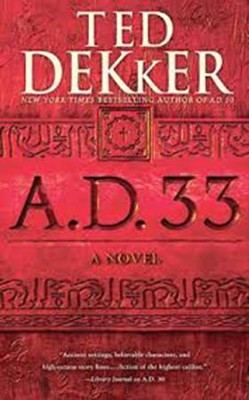 Maviah is a woman who is an outcast because she was born illegitimate and unwanted. When she meets Jesus, she finds strength in his words and peace in the unkind world she knows. She gathers a travelling kingdom of outcasts. When the rulers become threatened by this new kingdom, they are determined to crush her and all she loves. She sets out to find Jesus to ask for help only to find him facing his own death. Re-examine your own faith in this heartwrending story of defeat, uncompromising love and staggering victory.

They call her the Queen of the Outcasts. Maviah, a woman whose fate was sealed on her birth by this world-unwanted, illegitimate, female, a slave-subject to the whims of all. But then she met a man named Yeshua who opened her eyes. She found strength in his words, peace from the brutal word around her. Because of what he taught her, she has gathered her own traveling kingdom of outcasts deep in the desert, wielding an authority few have seen. But when her growing power threatens the rulers around her, they set out to crush all she loves, leaving her reeling as a slave once more. She must find Yeshua to save her people, but when she does, she will be horrified to discover that he faces his own death.

Enter a story full of intrigue, heart-wrenching defeat, uncompromising love and staggering victory-one that re-examines everything you thought you knew about the heart of Jesus's stunning message and the power that follows for those who follow his easily forgotten way.

▼▲
TED DEKKER is a New York Times bestselling author of more than 35 novels with a total of more than 10 million books in print. He is known for thrilling writing that combines adrenaline-laced plots with incredible confrontations between good and evil.

▼▲
"This followup to A.D. 30 is as good as the first....Dekker is a storyteller extraordinaire, and this thought-provoking, gripping tale of a slave woman finding her true worth leaves readers captivated."
—RT Book Reviews
"The reigning king of Christian thrillers...kicks down the door of biblical fiction."—Publishers Weekly on A.D. 30
"[A.D. 30] showcases the New York Times best-selling author's gift for immersing readers in ancient settings, believable characters, and high-octane story lines."—Library Journal, starred review of A.D. 30
"A rich and engaging tale that captivates readers from the first page. The depth of insight and development into characters is outstanding....This is a must read."—RT Book Reviews, Top Pick! on A.D. 30
"This is the kind of book that the term 'sweeping epic' was made for."—Booklist on A.D. 30
"[A.D. 30] may be a genre unto itself: part historical fiction, part spiritual self-help."—New York Times on A.D. 30
"Dekker (Outlaw, 2013, etc.) makes the spiritual real...descriptions of the Nafud's dangers--think Lawrence of Arabia--are powerfully done, as are his portrayals of the perils posed by the clashing customs of Arabs, Jews and Romans."—Kirkus Reviews on A.D. 30
"Dekker, the prolific best-selling author of more than 20 books including the "Book of Mortals" series and "The Circle" trilogy, draws on his exotic Indonesian childhood for his new thrilling adventure saga. . .Combining a rich visual portrait of a Stone Age civilization and a surprising spiritual redemption, this excellent book will engage suspense and historical fiction readers."—Library Journal on Outlaw, starred review
Told with gritty realism to match The Hunger Games, Ted Dekker's Outlaw is an epic story of triumph over trial and the far-reaching power of great personal sacrifice.—Novel Crossing on Outlaw
"THE SANCTUARY may make you wonder if prisons manufacture more criminals than they rehabilitate. The vivid descriptions and drama are gripping, and the alternating POVs add depth to the characters and story. Dekker reminds us that we are all prisoners, though it may be our minds, vs. prison bars, holding us captive."—RT Book Reviews on The Sanctuary, 4 1/2 Stars TOP PICK!