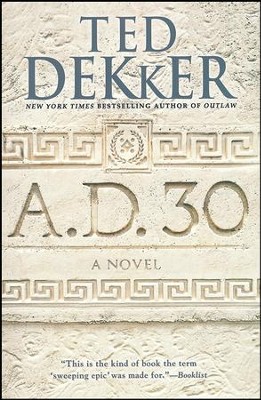 A sweeping epic set in the harsh deserts of Arabia and ancient Palestine. A war that rages between kingdoms on the earth and in the heart. The harrowing journey of the woman at the center of it all. The story of Jesus in a way you have never experienced it.Step back in time to the year of our Lord, Anno Domini, 30.

▼▲
A sweeping epic set in the harsh deserts of Arabia and ancient Palestine.
A war that rages between kingdoms on the earth and in the heart.
The harrowing journey of the woman at the center of it all.
Step back in time to the year of our Lord...A.D. 30.
The outcast daughter of one of the most powerful Bedouin sheikhs in Arabia, Maviah is called on to protect the very people who rejected her. When their enemies launch a sudden attack with devastating consequences, Maviah escapes with the help of two of her father's warriors--Saba who speaks more with is sword than his voice and Judah, a Jew who comes from a tribe that can read the stars. Their journey will be fraught with terrible danger. If they can survive the vast forbidding sands of a desert that is deadly to most, they will reach a brutal world subjugated by kings and emperors. There Maviah must secure an unlikely alliance with King Herod of the Jews.

But Maviah's path leads her unexpectedly to another man. An enigmatic teacher who speaks of a way in this life which offers greater power than any kingdom. His name is Yeshua, and his words turn everything known on its head. Though following him may present even greater danger, his may be the only way for Maviah to save her people--and herself.

▼▲
TED DEKKER is a New York Times bestselling author of more than 30 novels with a total of more than 10 million books in print. He is known for stories that combine adrenaline-laced plots with incredible confrontations between good and evil.

▼▲
"The reigning king of Christian thrillers...kicks down the door of biblical fiction."
—Publishers Weekly
"[A.D. 30] showcases the New York Times best-selling author's gift for immersing readers in ancient settings, believable characters, and high-octane story lines."—Library Journal, starred review
"THE SANCTUARY may make you wonder if prisons manufacture more criminals than they rehabilitate. The vivid descriptions and drama are gripping, and the alternating POVs add depth to the characters and story. Dekker reminds us that we are all prisoners, though it may be our minds, vs. prison bars, holding us captive."
—RT Book Reviews on The Sanctuary, 4 1/2 Stars TOP PICK on The Sanctuary
"This is the kind of book the term "sweeping epic" was made for."
—Booklist
"A rich and engaging tale that captivates readers from the first page. The depth of insight and development into characters is outstanding....This is a must read."
—RT Book Reviews, top pick
"An Enjoyable read...Maviah's journey to redemption was very engaging and left me eager for the next installment."
—Jennifer Fleming, CBA Retailers and Resources
"Dekker (Outlaw, 2013, etc.) makes the spiritual real."
—Kirkus Reviews
"Dekker, the profilic best-selling author of more than 20 books including the "Book of Mortals" series and "The Circle" trilogy, draws on his exotic Indonesian childhood for his new thrilling adventure saga. . .Combining a rich visual portrait of a Stone Age civilization and a surprising spiritual redemption, this excellent book will engage suspense and historical fiction readers."
—Library Journal on Outlaw, starred review
Told with gritty realism to match The Hunger Games, Ted Dekker's Outlaw is an epic story of triumph over trial and the far-reaching power of great personal sacrifice.—Novel Crossing on Outlaw
"Dekker's crossed a new threshold with OUTLAW. It's like nothing he's ever written, while at the same time, touching on the themes that made his previous works enjoyable. You can tell through the story that he's excited about the plot and the story and the message, and hopes that along the journey of reading, readers will go through just a bit of the journey he took when writing it. It's an astounding novel. But the most exciting part of this story is where it's going."
—Life Is Story on Outlaw
"Intricate and well thought out are Dekker's tales. Sovereign is heavily laced with religious parallels, but they only added extra life and depth to this book. I could mention there is plenty of action and interesting characters, but that would be an understatement. There is so much more here, material and ideas and concepts that made me think as well as enjoy the book...so be sure you take the time to delve into Sovereign. It's a different sword and fantasy novel, unlike anything out there. Which is good, because I didn't want to read another rehash of swords and magic. Dekker and Lee definitely set the bar a bit higher with Sovereign."—Suspense Magazine on Sovereign