Skip to main content
A Critique of the New Commonplaces
By: Jacques Ellul
Stock No: WW089754 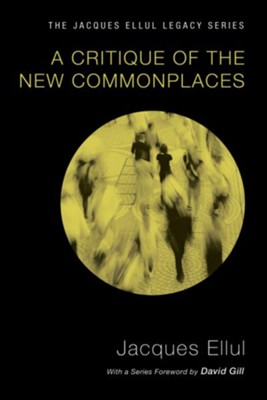 A Critique of the New Commonplaces

▼▲
Description: Jacques Ellul--much less solemn in mood than usual--here cracks open political and sociological commonplaces, destructively and wittily demonstrating how our unthinking acceptance of them encourages hypocrisy, smugness, and mental inertia. Among the stereotypes of thought and speech thus exploded are such phrases as ""You can't act without getting your hands dirty,"" ""Work is freedom,"" ""We must follow the current of history,"" and ""Women find their freedom (dignity) in work."" A certain number of these old saws preside over our daily life. They permit us to understand one another and to swim in the ordinary current of society. They are accepted as so certain that we almost never question them. They serve at once as sufficient explanations for everything and as ""clinchers"" in too many arguments. Ellul explores the ways in which such clich s mislead us and prevent us from having independent thoughts--and in fact keep us from facing the problems to which they are theoretically addressed. They are the ""new commonplaces."" Just as the nineteenth century brought forth many such commonplaces (they are enshrined in Leon Bloy's Ex g se and Flaubert's Dictionnaire des id es re ues), so our century has been busy creating its own. What Ellul has done is to stand still long enough to look at them carefully, attack them with cool reason, and leave them nakedly exposed. In this remarkable document, Ellul's caustic fearlessness is at the service of truths that often are cruel, but always are lucid and impassioned. He represents the voice of intelligence, and while doing so is often hilarious and always therapeutic about matters of first importance. About the Contributor(s): Jacques Ellul (1912-1994), a French sociologist and lay theologian, was Professor Emeritus of Law and of the History and Sociology of Institutions at the University of Bordeaux. He wrote more than forty books, including The Technological Society, The Humiliation of the Word, and The Technological Bluff.

▼▲
I'm the author/artist and I want to review A Critique of the New Commonplaces.
Back