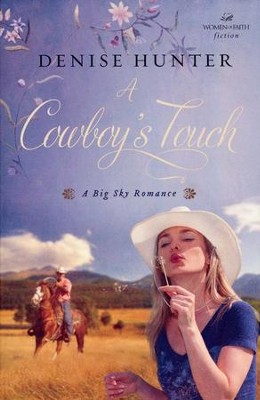 ▼▲
Four years ago, rodeo celebrity Wade Ryan gave up his identity to protect his daughter. Now, settled on a ranch in Big Sky Country, he lives in obscurity, his heart guarded by a high, thick fence.

Abigail Jones isn't sure how she went from big-city columnist to small-town nanny, but her new charge is growing on her, to say nothing of her ruggedly handsome boss. Love blossoms between Abigail and Wade--despite her better judgment. Will the secrets she brought with her to Moose Creek, Montana separate her from the cowboy who finally captured her heart?

Abigail is just in Moose Creek, Montana for the summer to temporarily care for her great aunt. But a tender-hearted cowboy beckons her to stay.

Abigail Jones intends to spend just one summer in middle-of-nowhere Montana with her Aunt Lucy. Time away from her job is just what Abigail needs to reassess her life. The slow pace has her breathing deeply for the first time in years. And the majestic scenery encourages her to get reacquainted with herself . . . and God.

What she didn't count on was the handsome widowed cowboy who owns the ranch where her aunt lives. When the rancher loses his daughter's nanny, Abigail decides to lend a hand for the summer.

Wade Ryan can't help being attracted to Abigail. But he's given up everything to protect his daughter, and he's not about to risk it all on a pretty face.

Under Abigail's care, Wade's home and daughter thrive. And with Wade's touch, Abigail's heart feels at home at last. But Abigail knows this elusive rancher is hiding something. Will her own secrets separate her from the cowboy who finally captured her heart?

Denise Hunter is the internationally published, bestselling author of more than 35 books, three of which have been adapted into original Hallmark Channel movies. She has won the Holt Medallion Award, the Reader’s Choice Award, the Carol Award, the Foreword Book of the Year Award, and is a RITA finalist. When Denise isn’t orchestrating love lives on the written page, she enjoys traveling with her family, drinking chai lattes, and playing drums. Denise makes her home in Indiana where she and her husband raised three boys and are now enjoying an empty nest and two beautiful granddaughters. To learn more about Denise, visit her website DeniseHunterBooks.com; Facebook: @AuthorDeniseHunter; Twitter: @DeniseAHunter; Instagram: @deniseahunter.

▼▲
In Denise Hunter's latest romance novel, A Cowboy's Touch, truth plays a big role in the life of Abigail Jones, a self-proclaimed "Truthseeker" and investigative magazine journalist. In John 14:6 Jesus says, "I am the way and the truth and the life," and Abigail realizes this on her quest for truth. She is forced to take a three month leave of absence from the magazine due to health concerns, so she spends the summer in Moose Creek, Montana, with her aging and eccentric Aunt Lucy. Here she finds just what the doctor ordered and more when she takes a job with Wade Ryan, a gorgeous single-parent rancher.

Abigail becomes a nanny for Wade's daughter, Maddy, and lives on his property, Stillwater Ranch. As Abigail grows closer to Maddy, her interest in Wade deepens until she discovers he is the celebrity cowboy J.W. Ryan who vanished after his wifes death. She learns he did this to protect Maddy, but quickly becomes torn between publishing the story exposing the missing cowboy and letting her magazine collapse. Abby writes an article despite her increasing emotional sentiments toward Wade, but he discovers her writing and is angered by her betrayal. When Wade forces her to leave Stillwater Ranch, the separation weighs heavily on the two until one event changes this.

The characterization and character development are strong throughout the book and ring true, particularly with women characters. However, as with most romance novels the plot is sometimes predictable. Overall, A Cowboy's Touch is a sweet romance about a big city girl falling in love with a macho cowboy and contains a solid message about truth. I recommend this book for women interested in the romance genre.  Michelle C. Archer, www.ChristianBookPreviews.com

▼▲
I'm the author/artist and I want to review A Cowboy's Touch, Big Sky Romance Series #1.
Back
Back