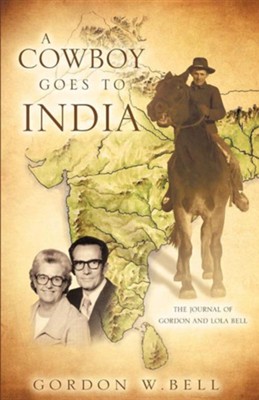 A Cowboy Goes to India

▼▲
Over the years Gordon Bell entertained his four sons with tales of his cowboy and prairie days along with tales of his heroes from literature and his imagination. Now along with his wife, he narrates the true stories of their lives - from the Great Plains of America to the central plains of India. The lives of Gordon and Lola Bell span vast changes in technology. Gordon's early childhood memories include transportation in horse-drawn wagons as well as sleighs. He remembers his family circling the radio to listen to Fibber McGee and Molly. He saw carpenters exchange hand tools for power tools. On the farm he watched his father drive a tractor with iron wheels, forbidden by his landlord to use rubber tires for fear they might poison the soil In rural North Dakota, there were neither electricity nor telephones and Gordon marveled when hearing about a refrigerator that burned kerosene to form ice. That seemed like a fairy tale to him. In Gordon and Lola's first parsonage on the prairie, they fed coal to their furnace and ice to their icebox. Under his leadership funds were raised to build a new parsonage, but they moved before it was built. Later in India, they traveled via a Model A Ford, stopping numerous times to patch tires. Whether by ox cart, bicycle of Model A Ford, they used whatever means available to get to their destinations. The first trips to India were on famous ocean liners. From horses and oxen to jets, Gordon and Lola Bell experienced challenges and joys throughout their 65 years of traveling together on two continents. Their greatest reward was seeing the work of the gospel expand greatly under leadership of the nationals. They lived to see the church in India reporting membership in the thousands rather than in the hundreds.

▼▲
I'm the author/artist and I want to review A Cowboy Goes to India.
Back