Skip to main content
SPRING CYBER EVENT STARTS NOW: And it's a really BIG deal! Up to 88% off through 5/24>
A Confession and Other Religious Writings
By: Leo Tolstoy, Jane Kentish
Stock No: WW444734 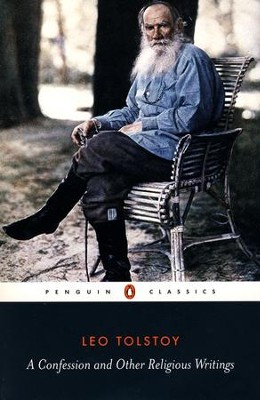 A Confession and Other Religious Writings

▼▲
By the time he was fifty Tolstoy had already written War and Peace and Anna Karenin, novels that would assure him of immortality. He had a wife, a large estate and numerous children; he was 'a happy man' and in good health, yet life had lost all meaning. ,em>A Confession (1879), a poignant fragment of autobiography, described a crisis familiar to many people. It records Tolstoy's depression and estrangement from the world, his desperate desire to find answers to the simplest questions of life and the beginnings of his passionate intellectual search for 'a practical religion not promising future bliss, but giving bliss on earth.

▼▲
Tolstoy's passionate and iconoclastic writings--on issues of faith, immortality, freedom, violence, and morality--reflect his intellectual search for truth and a religion firmly grounded in reality. The selection includes 'A Confession,' 'Religion and Morality,' 'What Is Religion, and of What Does Its Essence Consist?,' and 'The Law of Love and the Law of Violence.'

▼▲
Count Leo Tolstoy was born on September 9, 1828, in Yasnaya Polyana, Russia. Orphaned at nine, he was brought up by an elderly aunt and educated by French tutors until he matriculated at Kazan University in 1844. In 1847, he gave up his studies and, after several aimless years, volunteered for military duty in the army, serving as a junior officer in the Crimean War before retiring in 1857. In 1862, Tolstoy married Sophie Behrs, a marriage that was to become, for him, bitterly unhappy. His diary, started in 1847, was used for self-study and self-criticism; it served as the source from which he drew much of the material that appeared not only in his great novels War and Peace (1869) and Anna Karenina(1877), but also in his shorter works. Seeking religious justification for his life, Tolstoy evolved a new Christianity based upon his own interpretation of the Gospels. Yasnaya Polyana became a mecca for his many converts. At the age of eighty-two, while away from home, the writer suffered a break down in his health in Astapovo, Riazan, and he died there on November 20, 1910.

▼▲
I'm the author/artist and I want to review A Confession and Other Religious Writings.
Back
Back