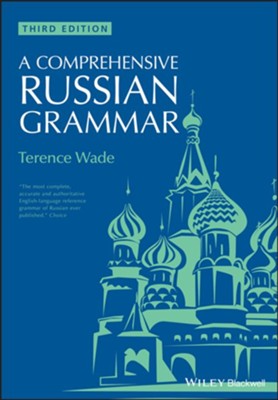 Terence Wade (1930–2005) was Professor Emeritus and Research Fellow in Russian Studies at the University of Strathclyde, Glasgow. He wrote 12 books, including Prepositions in Modern Russian (1985), Russian Etymological Dictionary (1996), The Russian Language Today (with Larissa Ryazanova-Clarke, 1999), and A Russian Grammar Workbook (Wiley-Blackwell, 1996).

David Gillespie is Professor of Russian at the University of Bath, UK, where he has taught Russian language and culture since 1985. Gillespie has published 8 books and more than 50 papers on modern Russian literature and ???lm.

▼▲
"When Scottish scholar of the Russian language Wade (1930-2005) died, he was well advanced in plans but not actual work to update the grammar that had been highly successful in its 1992 and 2000 editions. David Gillespie (Russian, U. of Bath) took up the task, choosing not to try to guess what innovations Wade had in mind. Instead, he consolidated and added a few new sections, careful to preserve what he believes to be already the best Russian grammar available. Beginning with an explanation of the Cyrillic alphabet and pronunciation, it works through all the parts of speech to word order." (Reference and Research Book News, February 2011)

▼▲
I'm the author/artist and I want to review A Comprehensive Russian Grammar - eBook.
Back
Back