Skip to main content
SPRING CYBER EVENT STARTS NOW: And it's a really BIG deal! Up to 88% off through 5/24>
A Companion to Theodore Roosevelt - eBook
Edited By: Serge Ricard
By: Serge Ricard(Ed.)
Stock No: WW22449EB 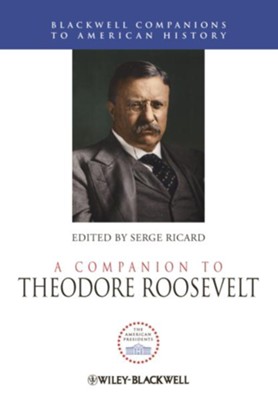 A Companion to Theodore Roosevelt - eBook

▼▲
A Companion to Theodore Roosevelt is the first comprehensive anthology to encompass Roosevelt as whole, highlighting both his personality and his skilled diplomacy.

▼▲
Serge Ricard is Professor Emeritus of American Studies and U.S. History at the Sorbonne Nouvelle (University of Paris III), France. He has published extensively in both French and English on Theodore Roosevelt, American expansionism, U.S. foreign policy in the late nineteenth and early twentieth century, and Mexican-American culture. His publications include Théodore Roosevelt: principes et pratique d’une politique étrangère (1991), The Mass Media in America: An Overview (1998), and The “Manifest Destiny” of the United States in the 19th Century: Ideological and Political Aspects (1999).

“Serge Ricard and his collaborators in this magnificent enterprise have managed to convey both the complexity of the person and the appeal of the leader... conveyed in essays which manage to blend critical scholarship with clarity of expression.”  (The Journal of Transatlantic Studies, December 2013)

“It is solidly made and will last. It comes as a hardback and, somewhat more cheaply, as an e-book.”  (Reference Reviews, 1 December 2012)

"The Blackwell Companions to American History series provides essential and authoritative overviews of the scholarship that has shaped our present understanding of the American past." (Expofairs.com, 3 December 2011)

▼▲
I'm the author/artist and I want to review A Companion to Theodore Roosevelt - eBook.
Back
Back