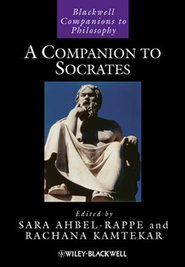 A Companion to Socrates

Edited By: Sara Ahbel-Rappe, Rachana Kamtekar
By: Sara Ahbel-Rappe(Eds.) & Rachana Kamtekar(Eds.)
More in Blackwell Companions to Philosophy Series
Wiley / 2009 / Paperback
Write a Review
In Stock
Stock No: WW192606
Buy Item Our Price$72.56
In Stock
Quantity:
Stock No: WW192606
Wiley / 2009 / Paperback
Quantity:
Add To Cart
of These in Your Cart

▼▲
Socrates has been extremely influential in Western thought, philosophy, and experience. Understand the man behind so much of our thinking with this comprehensive Companion! Covering the life the life of Socrates, the key doctrines associated with him, the range of Socratic studies, and Socrates' place in the larger philosophical world, you'll be better equipped to identify and understand the influence of Socrates. 560 pages, paperback.

▼▲
Written by an outstanding international team of scholars, this Companion explores the profound influence of Socrates on the history of Western philosophy.

▼▲
Sara Ahbel-Rappe is Associate Professor of Greek and Latin at the University of Michigan. She is the author of Reading Neoplatonism (2000) and a translation of Damascius’ Doubts and Solutions Concerning First Principles (forthcoming).


Rachana Kamtekar is Assistant Professor of Philosophy at the University of Arizona.

▼▲
"Everyone interested in Socrates and his legacy will find something valuable in this book..." Notre Dame Philosophical Reviews


"A remarkably rich and imaginative collection. Socrates was a philosopher who became a cultural icon; this book, with its massive historical range and its great variety of scholarly approach, does unique justice to his complexity."
G.R.F. Ferrari, University of California, Berkeley

"This is a stimulating collection that succeeds admirably in conveying the enormous range of responses that the ever puzzling Socrates has inspired through the ages, and continues to inspire. The essays on Plato's Socrates are fresh and vigorous, and the attention paid to later perspectives (from antiquity to the present, and especially recent centuries) helps make this volume a distinctive and unusually illuminating addition to Socratic studies. It should be a welcome companion to a figure who attracted devoted companions in his lifetime, and legions more ever since." Stephen White, University of Texas at Austin

"Technical issues are treated thoroughly and comprehensibly and the state of knowledge on Socrates is comprehensively presented both for today and its historical contexts. Its subject matter will be of interest to non-specialists with a penchant for philosophy, or for the history of thoght, since there is as much of interest here about the influence of Socrates on later periods as there is on the thought of the philosopher himself." Reference Reviews

▼▲
I'm the author/artist and I want to review A Companion to Socrates.
Back