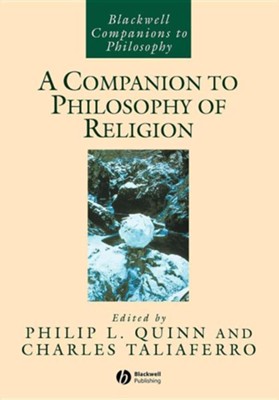 A Companion to Philosophy of Religion

▼▲
In over 78 newly-commissioned essays, this outstanding volume provides a comprehensive and authoritative guide to the philosophy of religion.

Written by many of today's leading figures, the volume surveys philosophical issues in the religions of the world, philosophical thought about religion in Western history, and important currents in twentieth-century philosophy of religion.

▼▲
Philip L. Quinn is John A. O'Brien Professor of Philosophy at the University of Notre Dame, Indiana, and was previously William Herbert Perry Faunce Professor of Philosophy at Brown University, Rhode Island. He is author of Divine Commands and Moral Requirements (1978), and of numerous articles in philosophy of religion, philosophy of science, theoretical physics, religious ethics, metaphysics, epistemology, value theory, political philosophy, and philosophy and literature. He has served as editor of the journal Faith and Philosophy (1990-5); as President of the Central Division of the American Philosophical Association (1994-5); and as Chair of the National Board of Officers of the American Philosophical Association (1995-9).

Charles Taliaferro is Associate Professor of Philosophy at St Olaf College, Minnesota. He was Visiting Scholar at Oriel College, Oxford, and has taught at Brown University, the University of Massachusetts, and the University of Notre Dame, Indiana. He is the author of Consciousness and the Mind of God (1994) and Contemporary Philosophy of Religion (Blackwell Publishers, 1997), and numerous papers in philosophy of religion, metaphysics, and ethics.

▼▲
"I must congratulate the editors on the volume. It is very comprehensive - bringing in the different religious traditions of the world and their philosophies, the history of the philosophy of religion, and some of its most modern developments. I think it has got the balance of its articles exactly right, focusing on the modern detailed analytic work, but not neglecting the wider perspective. It is very readable, and the various articles will serve as useful introductions to topics for students; it is a very valuable resource." Professor Swinburne, Oriel College, University of Oxford


<!--end-->"A superb collection! The topics are just right: from the religions of the world and currents in recent philosophy of religion to the theistic conception of God and the justification of theistic belief. The writing is authoritative, but also lively and stimulating. The book will be a valuable reference resource for years to come." Robert L. Arrington, Georgia State University

"Blackwell's Companions to Philosophy have already established themselves as up-to-date and reliable guides to the central fields within the discipline. This present volume which, offers a remarkably wide-ranging survey of philosophy of religion and philosophical theology in crisp and manageable essays by acknowledged authorities, is no exception." The Tablet

"Philip L. Quinn and Charles Taliaferro are to be commended for putting together an excellent resource in philosophy of religion. This is indeed a 'companion', for here one finds wise guides to the study of key issues in the philosophy of religion. This is a volume to refer to again and again. Essay after essay provides food for thought and additions to one's reading list." Paul Reasoner, Bethel Collage

"Another fine addition to the Blackwell Companions of Philosophy series has been published. I consider it a gold mine!" The Review of Metaphysics

▼▲
I'm the author/artist and I want to review A Companion to Philosophy of Religion.
Back
×
Back
×