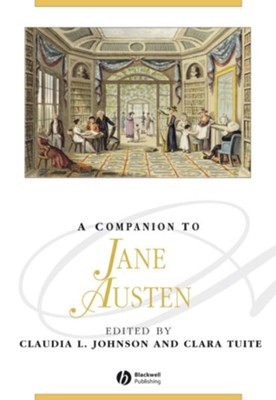 A Companion to Jane Austen - eBook

Edited By: Claudia L. Johnson, Clara Tuite
By: Claudia L. Johnson(Ed.) & Clara Tuite(Ed.)
More in Blackwell Companions to Literature and Culture Series
Wiley-Blackwell / 2011 / ePub
Write a Review
In Stock
Stock No: WW27363EB
Buy Item Our Price$38.00
In Stock
Stock No: WW27363EB
Wiley-Blackwell / 2011 / ePub
Add To Cart
of These in Your Cart

▼▲
Reflecting the dynamic and expansive nature of Austen studies, A Companion to Jane Austen provides 42 essays from a distinguished team of literary scholars that examine the full breadth of the English novelist's works and career.

Claudia L. Johnson is Chair of the Department of English at Princeton University. Her previous books include Jane Austen: Women, Politics, and the Novel (1988), Equivocal Beings: Politics, Gender and Sentimentality in the 1790s (1995), and The Cambridge Companion to Mary Wollstonecraft (2002), along with editions of Jane Austen’s Mansfield Park (1998), Sense and Sensibility (2002), and Northanger Abbey (2003). Her forthcoming works include Jane Austen’s Cults and Cultures, tracing permutations of “Jane mania” from 1817 to the present, and Raising the Novel, which explores modern efforts to create a novelistic canon by elevating novels to keystones of high culture.

Clara Tuite is Senior Lecturer in English at the University of Melbourne. She is the author of Romantic Austen: Sexual Politics and the Literary Canon (2002, 2008), as well as several essays on Austen, and the co-editor, with Gillian Russell, of Romantic Sociability: Social Networks and Literary Culture in Britain, 1770-1840 (2002, 2006).

▼▲
"The advantage is that the chapters tend to be manageable, clear, and focused - perfect, in fact, for assigning to undergraduate and beginning graduate students." (Notes and Queries, March 2010)

"This book would be a worthy addition to any university, school and even private library in a place where Austen is read and re-read." (Transnational Literature , May 2009)

"Austenites should be delighted with this comprehensive survey of contemporary Austen studies. [...] This should become a standard Austen reference. Highly recommended." (Choice, August 2009)

▼▲
I'm the author/artist and I want to review A Companion to Jane Austen - eBook.
Back
Back