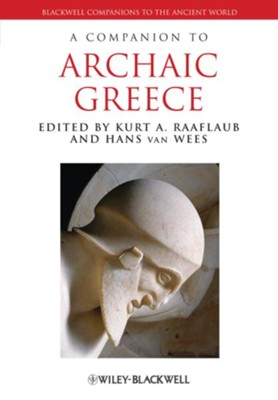 A Companion to Archaic Greece

▼▲
A systematic survey of archaic Greek society and culture which introduces the reader to a wide range of new approaches to the period.

Kurt A. Raaflaub is David Herlihy University Professor and Professor of Classics and History, Royce Family Professor in Teaching Excellence (2005-8) and Director of the Program in Ancient Studies at Brown University. His recent publications include The Discovery of Freedom in Ancient Greece (2004), Social Struggles in Archaic Rome (Blackwell, 2005) and War and Peace in the Ancient World (Blackwell, 2006).

Hans van Wees is Professor of Ancient History at University College London. His publications include Status Warriors: War, Violence and Society in Homer and History (1992) and Greek Warfare: Myths and Realities (2004), and he has co-edited four volumes on archaic Greece, war and violence, and Herodotus.

“For those interested in Classical Greece, this volume is an essential.”  (Near East Archaeological Society Bulletin, 11 December 2013)

"This is a varied, wide-ranging, stimulating and exciting volume which should open the way to even further investigations of archaic Greece." Bryn Mawr Classical Review, February 2011

“Offers an unprecedented range and depth of perspectives and material, much of which has been otherwise unavailable in English.” Ancient West and East

▼▲
I'm the author/artist and I want to review A Companion to Archaic Greece.
Back
×