A Commentary of the New Testament
By: John Trapp 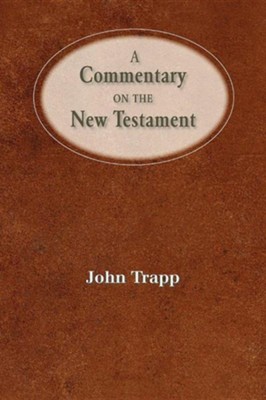 A Commentary of the New Testament

▼▲
"John Trapp's (1601-1669) New Testament commentary is an old Puritan classic, often reprinted, and packed with colorful paraphrases and captivating illustrations. It is soundly Reformed and always worth consulting in conjunction with other commentaries."--Joel R. Beeke. (Christian)

▼▲
John Trapp (born Croome d'Abetot on 5 June 1601 - died 16 October 1669 in Weston-on-Avon ) was an English Anglican Bible commentator. His large five-volume commentary is still read today and is known for its pithy statements and quotable prose. His volumes are quoted frequently by other religious writers, notably Charles Spurgeon. Ruth Graham, the daughter of Ruth Bell Graham, said that John Trapp, along with C.S. Lewis and George MacDonald, was one of her mother's three favorite sources for quotations. Trapp studied at the Free School in Worcester and then at Christ Church, Oxford (B.A., 1622; M.A., 1624). He became usher of the free school of Stratford-upon-Avon in 1622 and its headmaster in 1624, and was made preacher at Luddington, near Stratford, before becoming vicar of Weston-on-Avon in Gloucestershire. He sided with parliament in the English Civil War and was arrested for a short time. He took the covenant of 1643 and acted as chaplain to the parliamentary soldiers in Stratford for two years. He served as rector of Welford-on-Avon in Gloucestershire between 1646 and 1660 and again as vicar of Weston from 1660 until his death in 1669. Be careful what books you read, for as water tastes of the soil it runs through, so does the soul taste of the authors that a man reads. -- John Trapp He who rides to be crowned will not mind a rainy day. -- John Trapp

Q: Does this publication of John Trapp's Commentary use the KJV for it's translation?

Because John Trapp was a Puritan, he probably used the Geneva Bible.

▼▲
I'm the author/artist and I want to review A Commentary of the New Testament.
Back
×