Skip to main content
A City Through Time
By: Philip Steele, Steve Noon
Stock No: WW402490 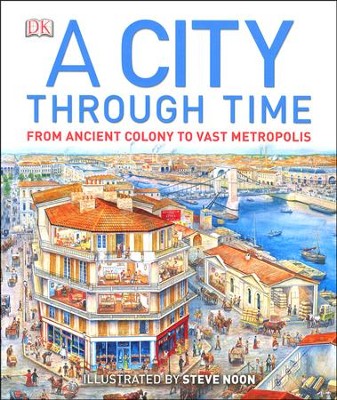 A City Through Time

▼▲
Follow the story of a city from an ancient colony to a vast modern metropolis through stunning full-color illustrations.

A City Through Time will transport you back to another age, as the award-winning Steve Noon brings the past to life in style. Panoramic scenes presented in a unique cutaway style are packed with colorful pictures showing everyday life in the city across the centuries. Clear descriptions surround each beautiful and jam-packed illustration to make sure the details aren't lost as you meet the characters who live and work there. Plus, each scene has a page devoted to key features, so you can get up close to a Roman bath-house, a medieval castle, or a modern skyscraper.

A photographic section profiles great cities throughout history and a glossary tells you what you need to know about architecture, technology, work, and costumes throughout the ages.

Steve Noon's A City Through Time is perfect for parents and children to look at together or for school projects. The more you look, the more you'll see.

▼▲
Steve Noon is an artist from Kent, England. Educated at Art College in Cornwall, he is the illustrator of A City Through Time, A Port Through Time, and A Street Through Time, as well as The Story of the Nile and The Story of the Titanic. He has received numerous awards for his illustrations, including the Shankei Children’s Literature Prize in 2001 and the Longman History Today History Book of the Year in 2000.Philip Steele is the author of many nonfiction books for children. He has worked for publishers such as Dorling Kindersley, Quarto, HarperCollins, Macmillan, and numerous others. Steele also writes tourism and guide books for adults, display text for museums and libraries, and facts for websites. He regularly attends the London Book Fair.

▼▲
I'm the author/artist and I want to review A City Through Time.
Back
Back