A Christmas Carol
By: Charles Dickens
Illustrated By: Ángel Domínguez 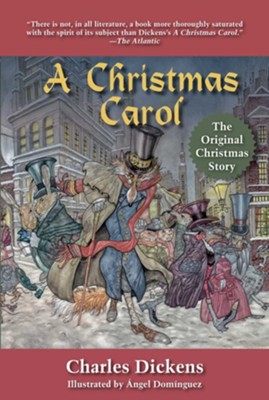 ▼▲
The Handsome New Edition of the Classic Christmas Story with Brand-New Illustrations!

Follow along with stingy Ebenezer Scrooge as he encounters the ghosts of Christmas Past, Present, and Future in this handsome new edition of the classic A Christmas Carol! Charles Dickens’s original novel is now accompanied by brand-new illustrations from artist &Aacute;ngel Dom&iacute;nguez. Your child will be enthralled by beautiful, full-color pictures featuring animals as the famous Scrooge, Marley, Bob Cratchit, Tiny Tim, and more.

Begin a new Christmas tradition as you and your child dive into Victorian London in this stunning new edition of A Christmas Carol.

▼▲
Charles Dickens was a famed British novelist who began his career as a freelance reporter. One of his first works, The Posthumous Papers of the Pickwick Club, sparked his fame, and he soon began touring the US and England performing readings of his works. Today, Dickens is known as one of the most prolific Victorian authors and was a staunch advocate for the poor and social reform. Some of his most famous works include Oliver Twist (1839), A Christmas Carol (1843), A Tale of Two Cities (1859), and Great Expectations (1861).

&Aacute;ngel Dom&iacute;nguez was born in the Basque Country in 1953. He is an award-winning illustrator of more than twenty books and is known throughout Spain. His lavish work has already been compared to some of the greatest illustrators of the past century, including one of his inspirations, Arthur Rackham. &Aacute;ngel’s art has graced postage stamps, magazine illustrations, stationary, postcards, earthenware, and more. He has illustrated multiple Racehorse for Young Readers books including The Jungle Book (2016), The Twelve Days of Christmas (2017), and Beauty and the Beast (2017)  The art that he created for The Jungle Book won the CCEI Award in Spain for best illustrated book. Also notable among his work is "The King’s Gift," which he illustrated specifically for Queen Rania of Jordan in 2000. He lives with his wife in Laredo, Spain.

▼▲
I'm the author/artist and I want to review A Christmas Carol.
Back
×