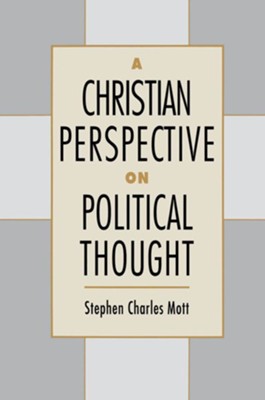 A Christian Perspective on Political Thought

▼▲
A CHRISTIAN PERSPECTIVE on POLITICAL THOUGHT by STEPHEN MOTT evaluates political ideologies, including traditional conservatism, liberalism, democracy, laissez-faire conservatism, Marxist socialism, and democratic socialism, giving special attention to their classical exponents and ideas. Asserting that political visions ultimately depend on cultural values that themselves require vigorous religious faith in a particular society. Mott's interdisciplinary study offers a valuable introduction to Christian political thought as well as a look at the connection between politics and religion.

▼▲
Arguing that Americans make political choices in terms of a general notion of right and wrong, yet lack a sound, objective foundation for such values, evangelical scholar Stephen Mott formulates a Christian political theory that supplies such norms. Drawing on theological and biblical sources,
Mott thoroughly develops the biblical and theological foundations for politics and political evaluation. Mott proposes that political philosophies should be evaluated in light of Christian theological and ethical values--specifically the understanding of power, human nature, the nature of group
life, justice and love, government, and time. He then applies this critical framework in an evaluation of political ideologies, including traditional conservatism, liberalism, democracy, laissez-faire conservatism, Marxist socialism, and democratic socialism. He gives special attention to their
classical exponents and ideas. Asserting that political visions ultimately depend on cultural values that themselves require vigorous religious faith in a particular society, Mott's study offers a valuable introduction to Christian political thought as well as an illuminating look at the connection
between politics and religion.

▼▲
"Stephen Mott compellingly argues that the major contending political stances rest on competing views of justice, that we can tell the more valid from the less valid views, and that the biblical understanding of justice is more basic than thinner, flatter modern views and most classical, secular
ones. This is a substantive contribution to public discourse."--Max L. Stackhouse, Andover Newton Theological Seminary
"Mott's work will aid in the intelligent evaluation of the political realities that affect all of us."--Spiritual Life
"[Mott] is academic in the best sense - one gets the impression that he has thought deeply about his subject, and he writes with that rare amalgam of authority and clarity. It is always a delight to find somebody who is so steeped in the literature on political philosophy. Mott does not write in an
evangelical 'bubble' but takes on the best of them....[A Christian Perspective on Political Thought] deserves a central place on reading lists in theological colleges and university departments."--Third Way
"A scrupulously researched and carefully organized guide book to modern Protestant religious thinking in a world of fearful political crises."--Ward M. Morton, Southern Illinois University
"This book should be greeted as another sign of evangelical scholarship's arrival into the mainstream of American public discourse....An impressive intellectual effort....Clearly, Mott has done his homework, indicating again that theologians are sometimes the most broadly conversant intellectuals we
have. One can learn much from the densely packed chapters."--The Review of Politics

▼▲
I'm the author/artist and I want to review A Christian Perspective on Political Thought.
Back