Skip to main content
SPRING CYBER EVENT STARTS NOW: And it's a really BIG deal! Up to 88% off through 5/24>
A Christian Peace Experiment
By: Ian M. Randall
Stock No: WW639982 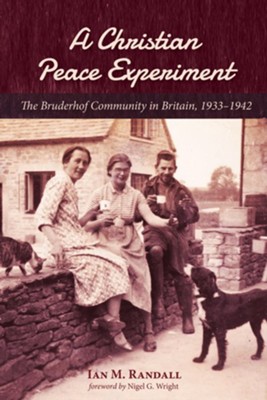 ▼▲
This book examines part of the development of the Bruderhof community, which emerged in Germany in 1920. Community members sought to model their life on the New Testament. This included sharing goods. The community became part of the Hutterite movement, with its origins in sixteenth-century Anabaptism. After the rise to power of the Nazi regime, the Bruderhof became a target and the community was forcibly dissolved. Members who escaped from Germany and travelled to England were welcomed as refugees from persecution and a community was established in the Cotswolds. In the period 1933 to 1942, when the Bruderhof's witness was advancing in Britain, its members were in touch with many individuals and movements. This book covers the Bruderhof's connections with (among others) the Fellowship of Reconciliation, Dietrich Bonhoeffer, the Peace Pledge Union, the social work of Muriel and Doris Lester in East London, Jewish refugee groups, and artistic pioneers like Eric Gill. As significant numbers of British people joined the Bruderhof, its farming, publishing and arts and crafts activities extended considerably. But with the outbreak of the Second World War, German members came to be regarded with suspicion and British members became unpopular locally because they were pacifists. Although the Bruderhof was defended in Parliament, notably by Lady Astor, it seemed that German members would be interned as enemy aliens. The consequence was that by 1942 over 300 community members had left England. With Mennonite assistance, they began to forge a new life in South America. This book traces a remarkable Christian peace experiment being undertaken in a time of great political upheaval. ""The Bruderhof was a community of Christians who tried to live a simple life dedicated to the ideal of peace. Their visionary German founder Eberhard Arnold had started the movement in the wake of the disasters that enveloped Germany after the First World War. . . Ian Randall has written a full, evocative, and appealing account of a group who in troubled times 'wanted to follow Jesus and do his will.'"" --David Bebbington, Professor of History, University of Stirling, Scotland ""This detailed narrative fills a longstanding gap in Bruderhof historiography--the story of the Cotswold Bruderhof in England, particularly during the formative years as it took shape between the Nazi confiscation of the Rhoen community in 1937 and the Bruderhof's transition to Paraguay in 1940 . . . As images of refugees, racial violence, and warfare once again dominate the news media, the Cotswold story is powerful and timely testimony to an alternative vision for humanity."" --John D. Roth, Professor of History, Goshen College ""This absorbing book is an important contribution to the history of the Anabaptist movement. Based on thorough research and drawing on a wide variety of sources, it charts the early years of the Bruderhof in Germany and England during a turbulent period of their history and explores the remarkable commitment of the founders and community members to peace witness, shared lifestyle, and mission. Through this sympathetic historical study, Ian Randall highlights issues which remain relevant today."" --Linda Wilson, Research Fellow, Bristol Baptist College ""Christians from many traditions have been learning from the Anabaptists in recent years. The Bruderhof communities embody a distinctive and enduring witness to principles and practices inspired by the Anabaptist vision. Ian Randall's detailed study tells the story of the Bruderhof in a crucial early phase of their life in England, inviting us to learn from their faithfulness in the midst of struggles."" --Stuart Murray Williams, Anabaptist Network, Chair, Mennonite Trust, United Kingdom ""In A Christian Peace Experiment, Ian Randall offers a scholarly and approachable case study of the Bruderhof, a significant Christian movement, at an important stage in its development and growth when it moved from

▼▲
I'm the author/artist and I want to review A Christian Peace Experiment.
Back