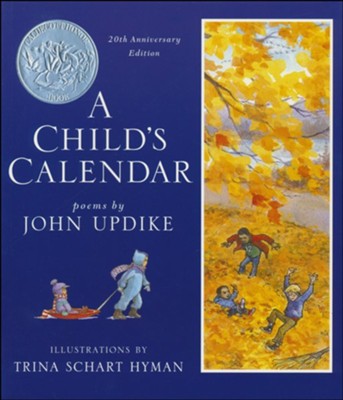 Celebrate the little moments that make each month special in this beautiful picture book featuring twelve poems about a family and the turn of the seasons. From the short, frozen days of January, through the light of summer, to the first snowflakes of December, Updike's poems rejoices in the familiar, wondrous qualities that make each part of the year unique.

Hyman's award-winning paintings--modeled after her own daughter, son-in-law and grandchildren--depict an interracial family going about the business of their lives throughout the year: sledding in January, watching fireworks in July, and playing in the autumn leaves. Bold and colorful, they're filled with the intricate detail for which her art is famous-- including cameo appearances by the artist and her partner, Jean Aull.

Featuring a redesigned cover, the 20th Anniversary Edition of this inclusive Caldecott Honor book is a beautiful read-aloud to treasure throughout the year, with family and friends.

▼▲
John Updike (1932-2009) was one of America's greatest postwar writers, and the author of more than 40 books, including novels, short stories, poems, and literary criticism. His awards include the Pulitzer Prize, the National
Book Award, and the National Book Critics Circle Award.

Trina Schart Hyman (1939-2004) was a renowned illustrator best known for her fairy tale, medieval, and Arthurian art. She was awarded one Caldecott Medal, three Caldecott Honors, and the Golden Kite Award. She created iconic, exquisite illustrations for more than 150 books. Born in Philadelphia, she lived most of her life in New Hampshire.

▼▲
"Updike's poetry and Hyman's glowing illustrations lovingly portray a year in the life of a child . . . in this gem."—School Library Journal, starred review

"Each evocative illustration has its own story to tell, celebrating the small moments in children's lives with clarity and sensitivity, with empathy and joy.  A beautifully illustrated edition of Updike's poems for children."—Booklist

"The language and illustrations are . . . vibrantly alive enough to keep young readers occupied through more than one reading."—Publishers Weekly

"Updike's poems are sometimes pretty, sometimes playful, and always evocative, while Trina Schart Hyman's illustrations not only complement the verse, but add their own layers of meaning and wit. . . . A truly timeless book about time."—Bruce Handy, author of Wild Things

▼▲
I'm the author/artist and I want to review A Child's Calendar (20th Anniversary Edition).
Back
×