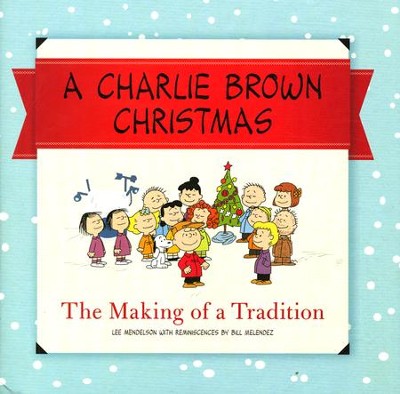 ▼▲
A Charlie Brown Christmas has been a Christmastime tradition for many families for almost 50 years. This book is a sneak peek into the behind the scenes of A Charlie Brown Christmas, told by producer Lee Mendelson with reminiscences by animator Bill Melendez. Inside this illustrated tribute you will discover the music, original scripts, production sheets, stories, and so much more, making this book an automatic classic to the holiday season. A wonderful gift for any child or collector.

No holiday season would be complete without watching Charlie Brown, Linus, Lucy, Snoopy, and the rest of the Peanuts gang give a forgotten tree a little love, recite the Christmas story, and sing "Silent Night."

For nearly fifty years, since first airing in December 1965, A Charlie Brown Christmas has been one of America's most beloved television shows and is a holiday television staple. Every year millions of fans tune in to the Emmy-winning Christmas special featuring Vince Guaraldi's iconic jazz score and Charles Schulz's Peanuts characters as they remind Charlie Brown, and all of us, of the true meaning of Christmas.

A Charlie Brown Christmas: The Making of a Tradition is a lushly illustrated tribute to the beloved television classic that takes readers behind-the-scenes of the Peanuts holiday special. It includes the script of A Charlie Brown Christmas, more than two hundred full-color pieces of original animation art, Vince Guaraldi's original score and publication notes for the songs "Christmas Time is Here" and "Linus and Lucy," and a look at the making of the feature from producer Lee Mendelson and original animator, the late Bill Melendez. The two share their personal memories and charming reminiscences on the Christmas special and reflect on their three decades of working with Peanuts creator, Charles M. Schulz.

A Charlie Brown Christmas: The Making of a Tradition is a delightful and fitting salute to the holiday special that never fails to deepen your love of Christmas, touch your heart, and give you hope.

Charles M. Schulz, the most popular cartoonist in history, published comic strips in 2,600 newspapers worldwide and won several prestigious awards, including the Congressional Medal of Honor. Mr. Schulz died on February 12, 2000, the night before his farewell Peanuts comic strip was published.

▼▲
I'm the author/artist and I want to review A Charlie Brown Christmas.
Back
Back