Skip to main content
A Brief History of the Paradox
By: Roy Sorenson
Stock No: WW179862 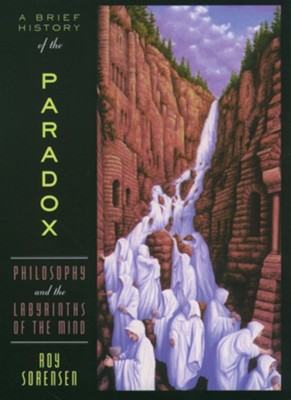 A Brief History of the Paradox

▼▲
"Sorenson argues that paradoxes are 'atoms of philosophy' out of which philosophical systems are constructed. An excellent account not only of paradoxes but also of the whole course of philosophy,"---Library Journal. Get inside the minds of Aquinas, Socrates, Pascal, Kant, Hegel, Ockham, Aristotle, and others. 416 pages, softcover.

▼▲
Can God create a stone too heavy for him to lift? Can time have a beginning? Which came first, the chicken or the egg? Riddles, paradoxes, conundrums--for millennia the human mind has found such knotty logical problems both perplexing and irresistible.
Now Roy Sorensen offers the first narrative history of paradoxes, a fascinating and eye-opening account that extends from the ancient Greeks, through the Middle Ages, the Enlightenment, and into the twentieth century. When Augustine asked what God was doing before He made the world, he was
told: "Preparing hell for people who ask questions like that." A Brief History of the Paradox takes a close look at "questions like that" and the philosophers who have asked them, beginning with the folk riddles that inspired Anaximander to erect the first metaphysical system and ending with such
thinkers as Lewis Carroll, Ludwig Wittgenstein, and W.V. Quine. Organized chronologically, the book is divided into twenty-four chapters, each of which pairs a philosopher with a major paradox, allowing for extended consideration and putting a human face on the strategies that have been taken toward
these puzzles. Readers get to follow the minds of Zeno, Socrates, Aquinas, Ockham, Pascal, Kant, Hegel, and many other major philosophers deep inside the tangles of paradox, looking for, and sometimes finding, a way out.
Filled with illuminating anecdotes and vividly written, A Brief History of the Paradox will appeal to anyone who finds trying to answer unanswerable questions a paradoxically pleasant endeavor.

▼▲
Roy Sorensen is Professor of Philosophy at Dartmouth College.

▼▲
"Because paradoxes show great minds at once at their most inspired and befuddled, a book like this makes an excellent introduction to philosophy in general. By treating how different thinkers deal with a problem, Mr. Sorensen provides a sort of whistle-stop tour of Western thought."--New York
Sun

▼▲
I'm the author/artist and I want to review A Brief History of the Paradox.
Back
Back