Skip to main content
A Brief History of Neoliberalism
By: David Harvey
Stock No: WW928327 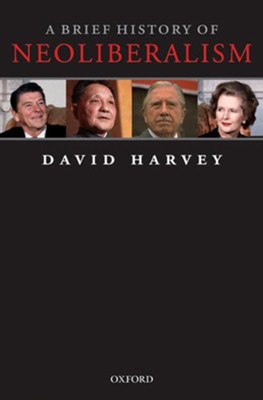 A Brief History of Neoliberalism

▼▲
Neoliberalism--the doctrine that market exchange is an ethic in itself, capable of acting as a guide for all human action--has become dominant in both thought and practice throughout much of the world since 1970 or so. Writing for a wide audience, David Harvey, author of The New Imperialism
and The Condition of Postmodernity, here tells the political-economic story of where neoliberalization came from and how it proliferated on the world stage. Through critical engagement with this history, he constructs a framework, not only for analyzing the political and economic dangers that now
surround us, but also for assessing the prospects for the more socially just alternatives being advocated by many oppositional movements.

▼▲
David Harvey is Distinguished Professor of Anthropology at the Graduate Center of the City University of New York. He formerly held professorial posts at Oxford University and The Johns Hopkins University, and has written extensively on the political economy of globalization, urbanization, and
cultural change. Oxford University Press published his book 'The New Imperialism' in September 2003 (reissued in paperback February 2005).

▼▲
"The most accessible and succinct overview of neoliberalism as an ideology and economic practice yet written. It lays out the origins of the idea, the devastating impact it has had on labor in both the advanced and developing world, and how it deepened crisis tendencies within the system...Harvey
has done the left a great service in laying out a clear, concise, and provocative history of neoliberalism, one that can help educate a new generation of radicals and revolutionaries."--International Socialist Review
"Harvey's book is deeply insightful, rewarding and stimulating. His history of neoliberalism may indeed be brief, but the richness and profundity of this volume is without question."--Michael J. Thompson, democratiya
"Presents a concise but extremely well-documented economic history of the last three decades, encompassing not only the usual G-7 countries but the entire world, with a particular emphasis on the US and capitalist China."-- Brian Holmes, Interactivist Info Exchange
"David Harvey has done it again. He has provided us with the most lively, readable, comprehensive, and critical guide to what might be called 'the condition of neoliberalism', uncovering its origins, tracing its spread around the globe, and exposing its devastating effects on the vast majority of
people everywhere."--Leo Panitch, Canada Research Chair in Comparative Political Economy, York University, Toronto
"With characteristic brilliance, David Harvey offers a razor-sharp analysis of the history and current condition of neoliberalism. In an intellectually extraordinary tour de force, he dissects the contradictions between the freedoms offered by neoliberalism and the liberties desired by the people.
This book convincingly demonstrates how neoliberalism restores class power, flirts openly with authoritarianism, and undermines democratic impulses. With democracy under siege, freedom's prospect resides squarely in the struggle for new political governance. A must read if you want to know the state
we are in and how to change it."--Erik Swyngedouw, Professor of Geography, University of Oxford
"This book compellingly challenges arguments praising the supposed advantages of neoliberalism. This is particularly important when the claim that there is no alternative to neoliberal restructing has been largely accepted... Harvey 's assessment of the shortcomings of neoliberalism and the
practices used to distract attention from these shortcomings is indispensable to discussions of neoliberal policies."--Aaron Peron Ogletree, J.D. The Journal of Buddhist Ethics and The Electronic Journal of Sociology
"Leave it to David Harvey to brilliantly summarize in little more than 200 pages what has taken more than thirty years to emerge as a political-economic form of governance."--The Professional Geographer
"The many strengths of A Brief History of Neoliberalism cannot be adequately conveyed in this short space, but include powerful analyses of the devastating impact of neo-liberalism on the environment and labouring conditions (especially for women), a nuanced perspective on the external and internal
forces compelling states to turn towards neo-liberalism, and the ways in which Marx's concept of "primitive accumulation" is highly pertinent to the neo-liberal era of capitalism."--Labour/Le Travail
"If you want to sharpen your thinking and understanding of these questions then I strongly recommend David Harvey's new book. Even if you disagree with parts of this readable Brief History, your assumptions and analysis will be well tested, and your arguments improved."--Open Democracy

▼▲
I'm the author/artist and I want to review A Brief History of Neoliberalism.
Back