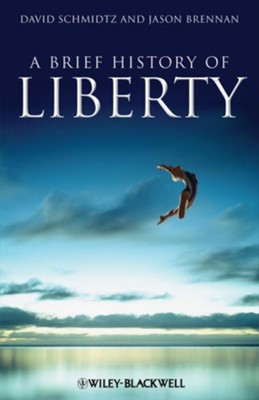 A Brief History of Liberty - eBook

▼▲
Through a fusion of philosophical, social scientific, and historical methods, A Brief History of Liberty provides a comprehensive, philosophically-informed portrait of the elusive nature of one of our most cherished ideals.

▼▲
"Although the book has a strongly classical liberal flavour, it also contains some interesting discussion of positive liberty. For one thing, Schmidtz and Brennan argue that the progress of negative liberty in western societies has massively expanded almost everyone's range of real options. For another, they suggest that this greater (negative and positive) external freedom can open the way to a greater internal or psychological" freedom". (The Philosophers' Magazine, 13 August 2010)


"Its brevity and simplicity is perhaps understandable, given the historical focus and ambitious scope of the book, and the authors' evident desire to get the light, entertaining and up-beat narrative moving." (The Philosopher's Magazine, August 2010)"The book weaves together a number of figures in social, political, philosophical, economic, and even psychological theory, in a way not commonly found, and it does so rather effectively." (Notre Dame Philosophical Reviews, September 05, 2010)

"Schmidtz and Brennan offer their readers insights into the freedom debate by following it through the broad sweep of Western history...[A Brief History of Liberty]... comprehensive notes and bibliographies and...deserve[s] to be taken seriously by those with an interest in liberty." (The Philosopher, summer 2010)

▼▲
I'm the author/artist and I want to review A Brief History of Liberty - eBook.
Back
Back