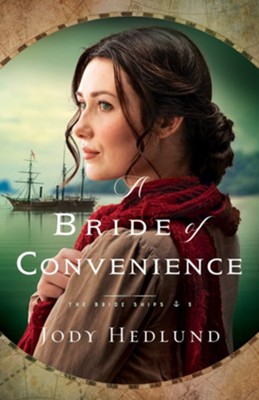 A Bride of Convenience, #3

▼▲
Unemployed mill worker Zoe Hart jumps at the opportunity to emigrate to British Columbia in 1863 to find a better life and be reunited with her brother, who fled from home after being accused of a crime.

Pastor to miners in the mountains, Abe Merivale discovers an abandoned baby during a routine visit to Victoria and joins efforts with Zoe, one of the newly arrived bride-ship women, to care for the infant. While there, he's devastated by the news from his fiancee in England that she's marrying another man.

With mounting pressure to find the baby a home, Zoe accepts a proposal from a miner of questionable character after he promises to help her locate her brother. Intent on protecting Zoe and frustrated by his failed engagement, Abe offers his own hand as groom. After a hasty wedding, they soon realize their marriage of convenience is not so convenient after all.

▼▲
Jody Hedlund is the bestselling author of over 20 historical novels for both adults and teens and is the winner of numerous awards including the Christy Award, Carol Award, and Christian Book Award. She lives in central Michigan with her husband, five busy teens, and five spoiled cats. Visit her at www.jodyhedlund.com.

▼▲
I'm the author/artist and I want to review A Bride of Convenience, #3.
Back
Back