Skip to main content
SPRING CYBER EVENT STARTS NOW: And it's a really BIG deal! Up to 88% off through 5/24>
A Bride Most Begrudging
By: Deeanne Gist
Stock No: WW200720 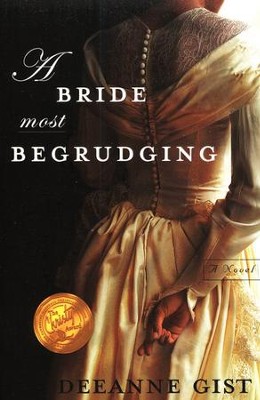 A Bride Most Begrudging

▼▲
When Lady Constance Morrow finds herself kidnapped and bound for the American colonies, she's sure she'll find a reasonable man who'll believe her story and send her back to England. Instead, she's "bought" by farmer Drew O'Connor. How long will it take before this marriage of convenience becomes very inconvenient for both of them? 320 pages, softcover from Bethany.

▼▲
Do You Believe in Love at First Fight?

Any ship arriving from England means good news for Virginia colony farmers. The "tobacco brides" would be on board--eligible women seeking a better life in America, bartered for with barrels of tobacco from the fields.

Drew O'Connor isn't stirred by news of a ship full of brides. Still broken-hearted from the loss of his beloved, he only wants a maid to tend his house and care for his young sister.

What he ends up with is a wife--a feisty redhead who claims she is Lady Constance Morrow, daughter of an Earl, brought to America against her will. And she wants to go straight back to England as soon as she can. She hasn't the foggiest notion how to cook, dares to argue with her poor husband, and spends more time working on mathematical equations than housework. What kind of a wife is that? Drew's Christian forbearance is in for some testing.

Headstrong and intelligent, deeply moral but incredibly enticing, Constance turns what was supposed to be a marriage of convenience into something most inconvenient, indeed.

▼▲
Deeanne Gist--known to her family, friends, and fans as Dee--has rocketed up the bestseller lists and captured readers everywhere with her very original, very fun historical & contemporary romances. Add to this four RITA nominations, two Christy Awards, rave reviews, and a growing loyal fan base, and you've got one recipe for success. She has a very active online community on her website at IWantHerBook.com and at Facebook.com/Deesfriends.

▼▲
I'm the author/artist and I want to review A Bride Most Begrudging.
Back
Back