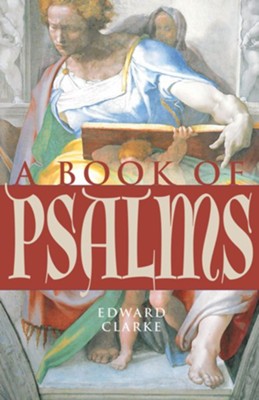 A Book of Psalms

▼▲
This collection of poems engages in new and animating ways with one of the profoundest texts of our past, the Book of Psalms. These poems are Clarke's response to his experience of reading the Psalter through once every month according to Cranmer’s divisions in the 1549 Book of Common Prayer.

▼▲
Edward Clarke’s Eighteen Psalms was published by Periplum Poetry in 2018. He is also the author of two books of criticism, The Vagabond Spirit of Poetry and The Later Affluence of W.B. Yeats and Wallace Stevens, and poetry editor of the online magazine Cassandra Voices.

"Edward Clarke’s The Vagabond Spirit of Poetry was but preparation for this extraordinary new work. Adapting the ethos of Philip and Mary Sidney in the sixteenth and seventeenth centuries, Clarke now turns to the psalms to engage with the spirit of these ancient poems. Clarke’s Psalter surprises, puzzles and excites the imagination: it always seems to find the essence of the psalm and its verse both expands and upturns its meaning. This is a rich resource for anyone seeking to understand the psalms in new ways." —The Revd. Canon Professor Susan Gillingham, Professor of the Hebrew Bible, University of Oxford; Fellow and Tutor in Theology, Worcester College

"It has been my privilege to watch the genesis of Edward Clarke's hugely ambitious project, a Psalter emerging from yet defiant of our shallow, ’progressive’ age. I have no doubt that these adept and marvelously transfigured psalms will be read (and read aloud) for many years to come." —Ned Denny, author of Unearthly Toys: Poems & Masks

"In an age of virtually ephemeral lyric poetry, the very notion of a long sequence of poems responding to the Psalms might seem unlikely, even fantastically ambitious, yet this is what Edward Clarke has given us:  a magnificent undertaking, rigorously composed, deeply considered, forcefully experienced. These poems—’uncompromising lines’ that read like ’ancient signs’—call out to us in the noise of an almost unbearable modern world."  —Ernest Hilbert, author of Last One Out

"These poems are like jewels in our turbulent world, revealing a powerful poetic imagination that engages profoundly with the role of art and of God within the human imagination and in our modern world. Provocative and challenging in form and substance, they should be heard as well as read." —Anna Scott-Brown, director of Overtone Productions and producer of the BBC Radio 4 series Conversations on a Bench and Clarke’s Psalter

▼▲
I'm the author/artist and I want to review A Book of Psalms.
Back