A Blessing for Miriam #2
By: Jerry S. Eicher 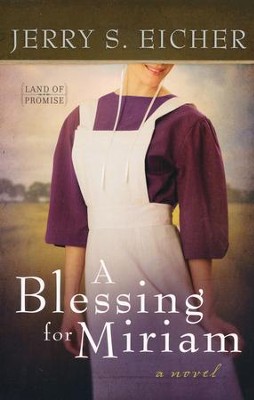 A Blessing for Miriam #2

▼▲
In the second book of bestselling author Jerry S. Eicher's new Land of Promise series, Miriam Yoder is looking forward to her wedding day with Wayne Yutzy. But when beautiful Esther Swartz arrives to care for her ailing grandmother, Miriam is wary of Wayne's past relationship with Esther.

When storms rip through the small Amish community in Oklahoma, Miriam's daett arrives to help in the rebuilding efforts. Under pressure from Miriam's daett the relationship with Wayne is upended, leaving Miriam to wonder if she must now build her new life as a single Amish woman.

In the second book of Jerry Eicher's Land of Promise series, Miriam Yoder is looking forward to her wedding day with Wayne Yutzy. But when beautiful Esther Swartz arrives in town, Miriam determines not to question Wayne's devotion even when questions arise over Esther's past relationship with Wayne.