Skip to main content
A Biblical Theology of Exile
By: Daniel L. Smith-Christopher
Stock No: WW32240 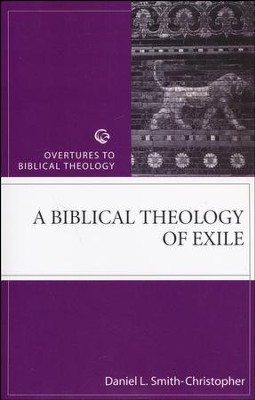 A Biblical Theology of Exile

▼▲
Smith-Christopher analyzes the theological significance of the Babylonian exile by taking the Hebrew texts seriously as authentic witnesses to Israel's experience of exile. In doing so, he seeks to move toward the construction of a "diasporic Christian theology," which ascribes a more important role to the theme of exile in Christian theology.

The Christian church continues to seek ethical and spiritual models from the period of Israel's monarchy and has avoided the gravity of the Babylonian exile. Against this tradition, the author argues that the period of focus for the canonical construction of biblical thought is precisely the exile. Here the voices of dissent arose and articulated words of truth in the context of failed power.

Daniel Smith-Christopher is currently a Professor of Religion (Biblical Studies) at the Bluffton College of Ohio.

He earned his D.Phil. in 1986 from Oxford University in England and his M.Div. in 1981 from Associated Mennonite Biblical Seminaries, Elkhart, Indiana.

Among his published works are the books:

1995 - Text and Experience: Toward a Cultural Exegesis of the Bible (edited).

Recently, Dr. Smith-Christopher published a number of papers, including:

June, 2003 - "Theft and Reconciliation: Genesis 32-33 and the Politics of Jacob," World Council of Churches Consultation on Ethnic Identity, National Identity, and the Unity of the Church (Bangor, Wales)

April, 2001 "The Challenge of Christian Nonviolence" War and Peace in the World Religions, California Lutheran University

▼▲
I'm the author/artist and I want to review A Biblical Theology of Exile.
Back
Back