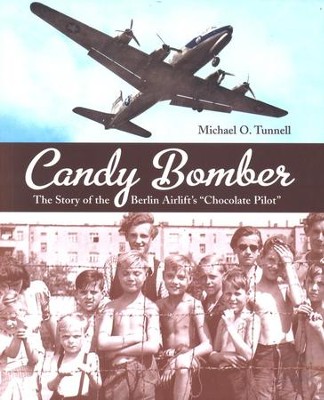 Candy Bomber: The Story of the Berlin Airlift's Chocolate Pilot

▼▲
During the years immediately after WWII ended, there were no sweets in Russian-blockaded Berlin--no chocolate, no candy, no gum. Lt. Gail S. Halvorsen was a pilot who flew in emergency supplies to feed the two million Berlin citizens. One day, he met a bunch of children and told them he'd drop candy and chewing gum---the signal would be the wiggling wings of his plane.

The first donations were from the crew, dropped with their handkerchief parachutes. As more and more people found out, the donations and accolades began pouring in from the Allies, as well as from personal letters addressed to "Onkel Wackelflugel" (Uncle Wiggly Wings) or Der Schokoladen-Flieger (The Chocolate Pilot).

A fascinating, true-life story of the man who started "Operation Little Vittles", as well as the Berlin children he influenced, this biography is filled with photographs and written simply enough for even young children to be taken in by the care one man showed. 110 indexed pages, softcover.

▼▲
One WWII pilot’s mission to lift the spirits of children living in war-torn Berlin in 1945 comes to life in this moving middle-grade historical account. After World War II the United States and Britain airlifted food and supplies into Russian-blockaded West Berlin. US Air Force Lieutenant Gail S. Halvorsen knew the children of the city were suffering. To bring a bit of hope, he began dropping chocolate and chewing gum by parachute.

What began as a one-time gesture of compassion turned into an official U.S. Air Force operation. "Operation Little Vittles" grew, as more and more pilots volunteered to drop the parachutes, and donations of candy and cloth poured in from all over. This inspiring story of one man’s contribution to the rebuilding of a country after war is a unique look at history.

▼▲
Michael has served on the Newbery Award Committee and on the selection committee for the NCTE Award for Excellence in Poetry for Children. He has also published many professional books, including THE STORY OF OURSELVES: TEACHING HISTORY THROUGH CHILDREN'S LITERATURE (Heinemann) and CHILDREN'S LITERATURE, BRIEFLY (Prentice Hall), and has written articles for a variety of educational journals. He and his wife, Glenna, live in Orem, Utah. They have four grown children.

▼▲
I'm the author/artist and I want to review Candy Bomber: The Story of the Berlin Airlift's Chocolate Pilot.
Back
Back